LinkedIn is funded by a number of investors such as Sequoia Capital, who have a large investment portfolio including a number of other internet companies like Google or Instagram, and the European Founders Fund. The website became profitable in 2006, and by 2010 it was ranked at number 10 on Silicon Valley Insider’s list of Top 100 Most Valuable Start-ups. Around that time, LinkedIn was valued at $1.575 billion. When Reid Hoffman and a number of his friends noticed there was gap in the market for social media platforms for professionals, LinkedIn was born. The social network was founded in December 2002 by Hoffman and a team of people from PayPal and Socialnet.com. It was opened to the public in May the following year. Whilst LinkedIn is officially head quartered in California, the company has offices in a number of different cities including Dublin, London and New York.

The number of internet users who have signed up to LinkedIn has grown immensely in the last few years. In the beginning of 2009, LinkedIn company history shows the networking platform boasted a not too shabby 32 million members but by October 2012 this number stood at an impressive 175 million. Whilst it took them a total of six years to gain their first 50 million users, they matched this number in 2011 alone! The LinkedIn company history throughout 2011 proved to be rather eventful. LinkedIn filed for an initial public offering in January 2011, and started trading on the 11th of May. Shares opened at $45 each but by the end of the day the price rose to more than 109 percent of the IPO price, closing at $94.25 per share. As the website started soaring in popularity, so did the advertising revenue, and LinkedIn surpassed Twitter in 2011 by earning $154.6 million just from ads. The first acquisition in the history of LinkedIn was trend-spotting service Mspoke in 2010. The social network intended to use their technology to perfect their recommendations services. 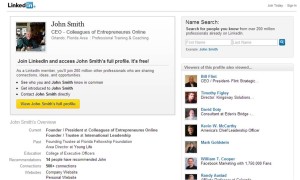 LinkedIn company history shows that they have been leading the way in business networking, and more and more people including university students are encouraged to sign up to their services. A significant number of LinkedIn members use the website for job hunting, and it appears to be the perfect social media platform for professionals to build a personal brand and sell your skills online.

Your LinkedIn profile can serve as a professional mirror which includes everything from your CV to recommendations and even your cover letter. Users are advised to treat their profile seriously and fill in every section to the best of their abilities. A LinkedIn profile now stands for a summary of your skills and capabilities anyone can access with a couple of clicks.

To help students and young people who are only starting out in the professional world, LinkedIn has a feature which tells each user what percentage of their profile is complete. This figure is based on how much information users have provided on their pages and whether they have completed all sections. To receive a perfect score, one must have at least five listed skills and 50 connections among other requirements.On top of personal descriptions, education and work history, and endless lists of hobbies and interests, the networking site gives users the opportunity to gather evidence and recommendations in support of the information added to the profile. Connections can choose to validate the information by adding endorsements to the list of skills each user creates. Whilst they can only endorse skills the profile owner already mentioned on their CV and don’t have access to add more themselves, your connections can also choose to write you references, which can serve as short letters of recommendation. 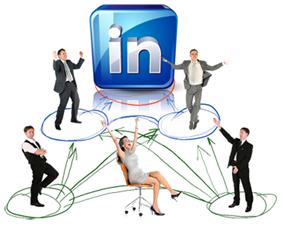 In order to expand their network on LinkedIn, introduce themselves to professionals in their field and meet potential employers, users can start participating in discussions in one of the many groups open on the site. There are over one million groups available to choose from, and at least a third of them don’t require any authentication to join. Groups are centred around anything from hobbies and personal causes to companies and projects, and offer an easy and enjoyable way to increase the number of connections members have. Users are also able to create their own groups, and the website offers plenty of statistics and features such as polls to help members make the most of the feature.

In order to further engage the business networking aspect of the social media outlet, LinkedIn also offers company pages. These act as a mini-online presence for companies, where they can post descriptions of their business, any news about the establishment, and even connect with and display groups of LinkedIn members who have listed to company as an employer. Some businesses only use their LinkedIn profiles as brand pages, but a number of them also post job listings and encourage people to apply for the open positions via LinkedIn.

The professional social network can be a job seekers’ goldmine. LinkedIn’s jobs tab is easy to use and allows users to search locally for positions that may suit them. More and more companies choose to advertise through LinkedIn as it’s both a reputable source and user friendly. For recruiters to post a job opening on the website for 30 days, LinkedIn usually charges around $300 and the listing will be published both on the company page and in user search results.

Despite LinkedIn’s generally good reputation as a trustworthy business networking website, they don’t have an entirely spotless record. In June 2012, LinkedIn company history shows they fell prey to internet sabotage and that they were a victim of a hacker attack when over 6 million passwords were stolen. Users were advised to change their passwords, with a focus on the importance of this change for people who accessed the website through the mobile app.

In the current job market and considering the modern tendency to apply for jobs online, LinkedIn is an interesting model to follow. Already acting as both a social network and a job listings website, it could potentially lead the way in recruitment techniques in the future.