There’s no doubt that PayPal has made a lot of people’s lives much easier and safer with its online payment services. With online shopping becoming a convenient solution for people with busy schedules or a way to save a few pounds and grab a bargain, there’s no surprise that a reliable online payment system is as popular as PayPal is today. But how much do we really know about PayPal and where it came from?

PayPal was originally launched in 1999 as a money transfer service by Confinity, then later became part of X.com as the result of the merger between X.com and Confinity in 2000. Both companies were offering email payments and other financial services, they both launched their services a year before and were headquartered in Palo Alto. Their combined talent pool included X.com founder Elon Musk, Confinity founder Peter Thiel and Roelof Botha of Sequoia Capital, and their teams who developed PayPal into the service we know today.

PayPal’s rise was quick and impressive, swiftly taking over eBay and becoming a direct and fierce competitor for eBay Payments, the online auction website’s own online payments system. As eBay Payments was limited to eBay auctions only, PayPal slowly but surely started gaining ground, and in its first year it was processing over 50 times more transactions on the site daily than eBay’s own service. A quarter of all closed eBay auctions were finalised via PayPal and the majority of auctions listed the service as an accepted method of payment.

eBay bought PayPal in 2002 for $1.5 billion, and the site was about to drive a number of competitors out of business. Yahoo!’s Pay Direct was shut in 2004, and Western Union’s BidPay stopped its service in 2007, although PayPal still has competition to this day in the form of services such as Google Checkout. PayPal announced plans to make its services available in shops in 2011, and a year later some 40 per cent of eBay’s revenue came from the financial services website.

PayPal has not been spared from publicised customer complaints, controversial frozen accounts and even lawsuits throughout its history. A number of lawsuits were filed against the company, a great number of them accusing PayPal of patent infringement. Most were settled out of court and the terms were never made publicly available.

Perhaps even more controversial were actions taken by PayPal to freeze “suspicious accounts” which were in fact used for fundraising. Notable cases include Richard Kyanka of Something Awful, who had his account frozen in 2005 after raising funds for the Red Cross after Hurricane Katrina, and April Winchell of Regretsy, who had her account frozen while raising money for a Secret Santa project in 2011. 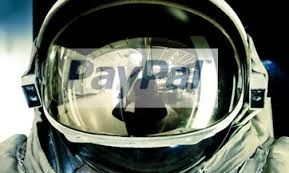 In 2013, PayPal turned its sight away from our planet and announced PayPal Galactic, a project running in collaboration with the SETI Institute which aims to provide financial services for people in space such as astronauts or future space tourists. Until it becomes a viable, day-to-day service, PayPal Galactic aims to analyse how commerce will work from space and how to help astronauts access their money.