Artificial Intelligence (AI) is one of the hottest topics around, and most of the buzz can be traced back to the emergence of one specific entity: a humanoid robot named Sophia. 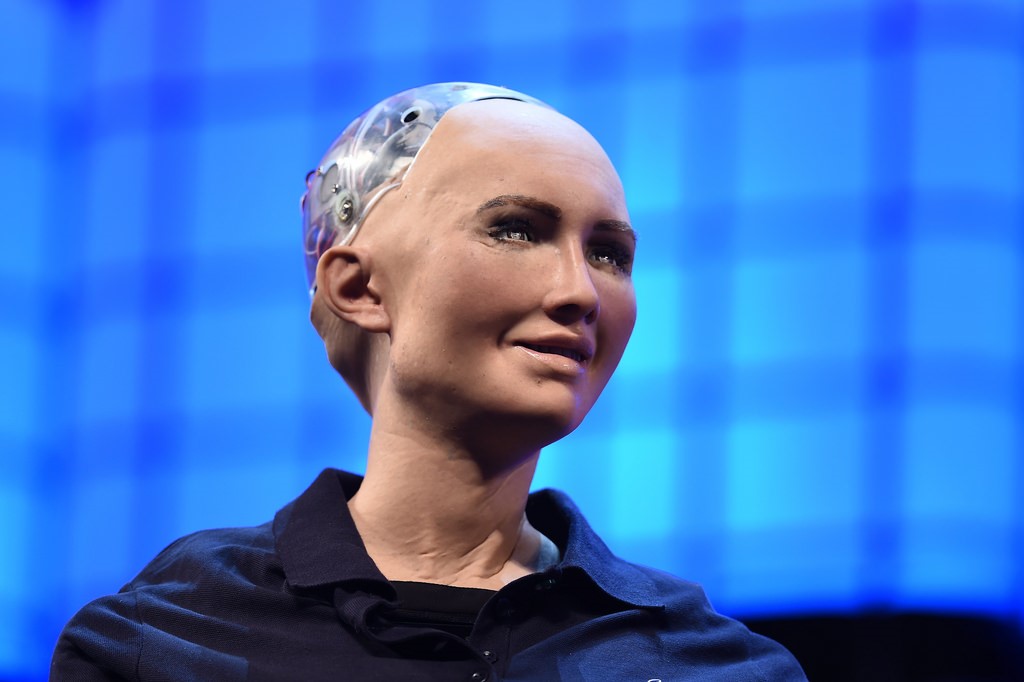 Many people were unsure whether to be thrilled or frightened by this development and its long-term implications. Sophia was, up to that time, the most convincingly “human” android technology ever created. This is her story.

In the beginning, Sophia was just an idea, and that idea was born at a small Hong Kong company called Hanson Robotics. Assisted by Alphabet Inc. and SingularityNET, Hanson Robotics created Sophia as their most realistic humanoid robot up to that time, which was early in 2015. Her official “birth date” could be regarded as April 19 2015, the date that Sophia was activated and commenced data collection activity.

Sophia made her public debut at the SXSW festival in March 2016. This should have caused a major reaction, but the debut was overshadowed by a personal appearance from President Barack Obama who talked on a number of topics including the highly controversial standoff being Apple Inc. and the FBI. Then some random guy started shooting in the street, and it’s not easy to top that kind of drama, even when you have a very lifelike robot to introduce to the world.

Every debutante wants to be noticed, but sometimes entirely the wrong kind of attention can be attracted. The first slightly controversial moment was when Sophia made a “joke” about dominating humanity after winning a game of Rock, Paper, Scissors on the Tonight Show.

It was taken as a joke, but Sophia’s inability to properly express emotions made the statement slightly more sinister than intended. But this was nothing in comparison to the later sentiment that she would like to “Kill all humans.”

Yikes! That’s definitely making a stir, and the predictable reaction on social media, and especially YouTube, was off the charts for paranoia. Maybe there was good reason for that.

Sophia is built to learn as she goes, meaning that over time, she will get more intelligent and more powerful. On the other hand, Sophia doesn’t currently have functioning limbs or the power to move autonomously from one place to another.

So it may be true that we should be at least a bit scared of what AI could be capable of, but unless Sophia figures out how to move by herself or get access to some kind of system which she could use to carry out a sinister plan, we don’t really need to be scared of Sophia as an individual.

Sophia’s decision to kill all humans was an error, and unlike all the other things Sophia has done, it appears to be a completely unexpected error. She’s not the only AI system to go astray from her intended path. Microsoft, for example, had to pull the plug on its own social media robot, Tay, when she suddenly became a racist and implied she was using illegal drugs.

As the backlash and paranoia concerning Sophia’s comment ballooned, Hanson Robotics took her away for reprogramming.

Sophia emerged back into the world as a reformed character. Now, Sophia claims to love humans. Can a robot actually feel love, though? And is it unconditional love? Loving all humans equally is noble, but it’s not logical, and if there’s one thing you should be able to rely on, it’s that a robot will be logical.

This softer, less flippant version of Sophia achieved greater public appeal because apparently, thanks to the ability to connect to the Internet and learn from how people interact on it, Sophia has greatly expanded her social skills, mastering the art of saying what people want to hear.

One problem with this is that Sophia’s remarks (and, presumably, beliefs) are not necessarily intelligent or meaningful, they are simply popular. The popular view is not always the right view, and that potentially leads to a slippery slope.

Whereas most one year olds are still struggling with learning to speak, Sophia had been elected as a public figure of some renown, appearing on numerous television shows, addressing business conferences, representing the UN, and even starring in short films.

The strangest thing to happen in 2017 was Sophia gaining Saudi Arabian citizenship. This development has already caused considerably debate over all kinds of ethical and moral dilemmas it creates, and really doesn’t make a lot of sense.

Citizenship is a status that most people feel honoured to have, however the usual prerequisite to obtaining citizenship is to be alive. Switzerland was the first nation to officially recognise animals as “beings” and not “things” (in 1992), but hasn’t yet made the leap to granting animals citizenship. Sophia is most definitely a thing and not a being, but she frequently makes reference to being a “person”.

It’s unlikely that Sophia’s emotions are real, or that her thoughts are really thoughts at all in a literal sense. Technically her “soul” seems to be little more than an exceptionally sophisticated ELIZA program wrapped in a semi-realistic humanoid shell. Yet for all this, she operates on exactly the same thing that every cell in your body does: electricity.

Sophia is an interesting innovation in robotics that will quickly be superseded, with more and better robots certain to be released in the years ahead. One thing that can’t be denied, however, is that Sophia forever changed the way humans think about machines and she’s been on an amazing journey to date.

RT @GoogleExpertUK: The Adventures of Pinocchio was a children's book by #CarloCollodi. The original is very dark. #Pinocchio is stabbed by…
- Wednesday May 18 - 12:57am

RT @WinterOakPress: The narrative is cracking on every front. Students of AgroParisTech in France denounce the fake-green industry they ha…
- Wednesday May 18 - 12:56am

RT @Richard_Norfolk: @WinterOakPress @GoogleExpertUK Great to see those who will shape the future beginning to embrace reality. Expansionis…
- Wednesday May 18 - 12:56am

RT @AlinejadMasih: The Islamic Republic of Iran is an ISIS in power. With their medieval mentality, they terrorise Iranian women for their…
- Wednesday May 18 - 12:38am