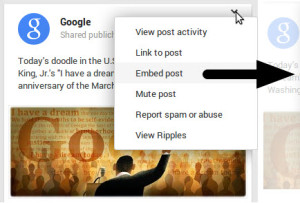 On Monday September 9th 2013, Google Plus unveiled a range of new features for the social media platform. One of these new features was Google Plus Embedded Posts. This is a tool which enables blog and content writers to embed Google Plus content on other pages.

A user who wishes to make use of a Google Plus post within a news story or blog is now easily able to do this. Users simply select the “Embed post” from the drop down menu in the post’s top right hand corner.

After this, users are able to copy and paste the provided line of code to embed the post. This Google Plus Embedded Posts option includes both text and pictures.

According to an official Google Plus blog, once a post has been embedded, users should be able to fully interact with it. This means that users are then able to +1 a post, comment, or follow the post’s author from the embedded post. “We want to make it easy to expand your audience across the web,” stated the Google Plus Director Seth Steinberg. The feature had previously been tested with specific publications which included National Geographic and Sports Illustrated. However the feature is now available to all users.

In addition to Google Plus Embedded Posts, Google‘s social media platform also unveiled the Author Attribution feature. This feature ties an author’s web content or blog article to their Google Plus profile.

The feature has been added as Google Plus is attempting to place a far greater emphasis on the content produced by an authentic author with a real identity, as opposed to anonymous, faceless content. To begin with, this feature is only linked to two platforms, WordPress and TypePad. However the platform announced plans to extend this service to other sites in the future.

The recent increase of services provided by Google Plus appears to be part of a larger movement across a number of platforms. This movement aims to make it far easier for people to make use of other forms of content across the internet. Facebook joined Google Plus in providing Embedded Posts to its users, whilst Twitter have announced an intention to provide a similar service called Related Headlines. This provides an incentive for both bloggers and journalists to include an embedded tweet in their stories.