Facebook is the mother of all social networks. The one that truly took social networking out of the teenage bedroom and into the high street and the corporate office. It was a massive success from day one and continues to be the dominant force in social networking.

Facebook’s basic premise is simple. It is a social network where users create a profile page about themselves on Facebook.com. They upload photos and information about themselves and post updates about their thoughts, ideas and what they’ve been up to. People can connect to their profile, check out their updates and their photos, show their approval by pressing the ‘like’ button, and even leave their own comments on their message board, or ‘wall’.

The ‘social’ aspect is the way you can connect to other profiles – friends, family, colleagues, groups you like, companies you admire – and be automatically notified when their page is updated – or they comment on yours. You can also play games and challenge your friends. For many users, it is the main channel for keeping in touch with friends, arranging your social life and having fun.

Wind back ten years, though, and never in his wildest dreams could young Mark Zuckerberg have imagined what his nerdy college project would turn into. Facebook made profits of US$64m (£41m) in the final three months of 2012 alone, while revenue jumped 40% to a massive US$1.6bn. Not bad for a site he initially built in a week from his student digs. 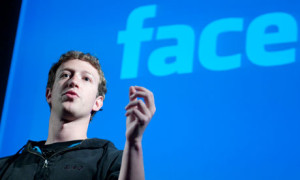 When Zuckerberg set up Facebook in February 2004, he was studying psychology at Harvard University. A keen computer programmer and avid hacker, he’d already experimented with some early social networking ideas – although of course, no one had actually coined the phrase social networking yet – in the shape of Coursematch, which allowed fellow students to view people taking their degree, and Facemash, where users were invited to rate people’s attractiveness.

Launched in October 2003, Facemash was a so-called ‘hot or not’ site, which he populated by hacking into student photos held on Harvard’s own servers. It was an immediate success and turned Zuckerberg into something of a college celebrity. The site received over 22,000 views in its first four hours online. Unsurprisingly, it also landed him in trouble with the Harvard authorities. Facemash was shut down within days and Zuckerberg faced disciplinary action, only just avoiding expulsion according to some accounts.

By January 2004, Zuckerberg was ready to take the Facemash idea further, with thefacebook – an online version of the brochures distributed to new students at Harvard (and other universities), providing photos and information on fellow students and staff at the university.

He launched the site on 4th February 2004. Like Facemash, thefacebook was an immediate success. Within 24 hours, over 1,200 Harvard students had signed up. After one month, around half of the students at the university had a profile on the site. 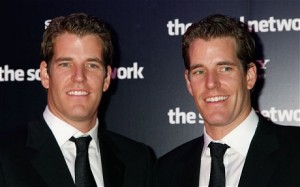 Also like Facemash, however, it quickly got him into trouble, not with the college authorities this time, but with three other students – 6ft 5 inch identical twins, and Divya Narendra – who accused Zuckerberg of stealing their idea.

They alleged they had engaged Zuckerberg to work on a new networking website they were developing. He had agreed and been involved in confidential talks about the development of the site. However, they claimed, he deliberately stalled the plan while using their idea as the basis for Facebook.

The dispute got ugly and rumbled on for quite a few years of claim and counter-claim. It was even made into a smash hit Hollywood blockbuster – The Social Network – starring Justin Timberlake.

It finally settled in August 2008, when the company set up by Narendra and the Winklevosses, ConnectU, received a reported settlement of US$65m in cash and shares from Facebook. 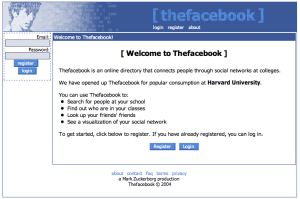 Such was the success of thefacebook at Harvard that in March 2004 it quickly expanded to other Ivy League universities, Stanford, Columbia and Yale, and then other universities right across North America. It became Facebook.com in August 2005 after the address was purchased for US$200,000, and over the next two years it gradually opened its doors to universities all over the world. In September 2006, it moved outside the academic arena for the first time, opening to anyone over the age of 13 with an email address.

By early 2012, Facebook was making profits of around US$1 billion, due largely to a massive increase in advertising revenues, which during 2011 increased almost 90% to $3.71 billion. Over half of its revenues are reported to come from the US, while Zynga, the social network gaming company that operates many of its most popular games (such as FarmVille and Words with Friends) through the Facebook platform, with Facebook receiving a slice of the income, accounting for around 12% of revenues in 2011.

For a company of its size, Facebook has bought relatively few other companies in the years since it was founded, in contrast to other web-based mega-businesses like Google. By far its highest profile acquisition was Instagram, an online photo-sharing, editing and social networking site, for which it paid US$1 billion in cash and stock in April 2012. 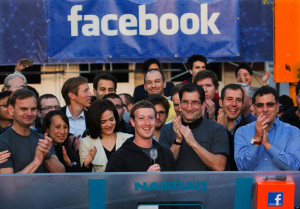 During all the years of Facebook’s colossal growth, Zuckerberg was adamant in his refusal to sell his baby, either to another big company (Microsoft was rumoured to be interested at one point, as was Google), or to a much wider pool of shareholders through a stock market listing (called an initial public offering, or IPO). Such was the company’s success, however, that by 2012 the clamour for investment made an IPO the obvious next step.

The IPO took place on May 18, 2012 and immediately became one of the biggest in history, valuing Facebook at over US$104 billion at its peak. Ultimately, the IPO was not a total success, however, and litigation is still ongoing, amidst claims of insider information and a deliberately overinflated share price. The shares lost more than a quarter of their value in under a month and over half their value in three months.

More recently, the company’s value has rallied, and in February 2013 it was valued at around US$62 billion. Not that Zuckerberg will be worried anyway. The latest estimates calculate his personal wealth at around US$14 billion.  A pretty good result for a college drop-out.