Every internet user has visited the homepage of Yahoo! or used one of its services but few are really acquainted with the internet giant’s somewhat tumultuous Yahoo! company history.

Yahoo! started out as “Jerry and David’s Guide to the World Wide Web”, and was created by Jerry Yang and David Filo in January 1994. Yang and Filo were Electrical Engineering graduate students at Stanford University at the time, and their new project functioned as a directory of websites as opposed to a searchable list. The name “Yahoo!” was first used in April 1994. The domain Yahoo dot com has been active since January 18, 1995.

Yahoo stands for Yet Another Hierarchical Officious Oracle.

Yahoo!’s founders claim the inspiration for the name came from their love of the word’s meaning as popularised by Jonathan Swift’s novel “Gulliver’s Travels”: rude and unsophisticated. However, the word “yahoo” had been previously trademarked, so they decided to add the exclamation mark.

Yahoo! raised around $3 million from two waves of funding from Sequoia Capital in 1995, and had their initial public offering (IPO) in 1996, when they sold 2.6 million shares opening at $13 per share. The dot-com bubble saw Yahoo! stock close at a record high of $118.75 per share, as well as discussing a potential merger with eBay. Whilst this never came to be, Yahoo! did sign an agreement with Google allowing them to tap into the latter’s search engine.

The burst of the dot-com bubble did not mean the end for Yahoo!, although their stock closed at a record low of $8.11 on 26 September 2001. Yahoo company history records a series of mergers and partnerships followed and started turning Yahoo! into the Internet portal we know today. Most notably, Yahoo! Messenger and Windows Live Messenger become interoperable after 2005. Free email storage capacity was upgraded to 1 GB in order to compete with Google’s newly launched Gmail service.

Yahoo and their relationship with Microsoft throughout the noughties is interesting to look back on. Merger talks occurred between 2005 and 2007, but they never came to any final deals. In 2008, Microsoft made an unsolicited bid to take over the company for over $44 billion. The offer was rejected as Yahoo! felt it was undervaluing the brand, but Microsoft CEO Steve Bullmer was adamant that they accept the deal or Microsoft will turn to a hostile takeover. At the same time, Yahoo! was weighing its options, including a potential merger with AOL. The Microsoft offer was finally withdrawn in June 2008. Later in 2009, the two companies came to an agreement which entitled Microsoft to use Yahoo!’s search engine technology for its new project, Bing. 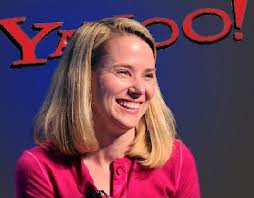 Since 2009, Yahoo! went through a number of changes in leadership and direction. A new Yahoo! home page called Metro was launched in July 2009 under Carol Bartz, who left two years later and was succeeded by former PayPal president Scott Thompson. Thompson’s time at Yahoo! was blighted by a controversy surrounding the academic achievements he boasted, and he was eventually replaced by interim CEO Ross Levinsohn, and finally by Marissa Mayer, ex-Google, who remains the CEO and President of Yahoo! today. At the beginning of her long stint at Google, she was their first female engineer. Mayer is now the youngest CEO of a Fortune 500 company. Marissa has been featured on Fortune magazine’s list of powerful business women every year since 2008.