Over 400 million people have a Gmail address. Since its inception, Google’s email service has caused quite a stir, sometimes for the wrong reasons and sometimes purely because of Google’s worldwide popularity. Gmail was announced to the public in 2004, although it was developed a few years prior by Paul Buchheit and allegedly functioned as an internal email service for Google employees. Its launch was greeted with extreme excitement.

However, the giant that Google is was initially dealt a blow when they learned that the domain “gmail.com” was already owned and registered with another business, garfield.com, and was part of their free email service. Google’s email service was purchased from garfield.com whose email service then shut down.

Google initially opened the service by inviting its Blogger users to the beta stage, and offering them the ability to invite a handful of friends in their turn. This exclusivity and the already existing rumours about Google’s plans to have a slice of the email pie meant everyone was bending over backwards to get their hands on an invitation.

With such high demand for accounts, it comes as no surprise that some users jumped at the chance to make some money, and invitations were selling at over a hundred dollars on eBay, with some specific accounts going for several hundred. As more invitations were made available, the email selling craze eventually died down. 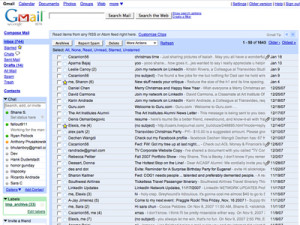 Gmail was integrated with other Google services such as Google Docs and Google Accounts.

From 2006 onward, users could open attached documents directly through word processing software Google Docs. A to-do list function was added in 2008, and Gmail was finally taken out of Beta testing in 2009.

Gmail allows users to customise their inbox by choosing a design, to categorise their email by adding labels, and automatically determines which emails are more important based on keywords in the text.

Constant updates to its layout, especially to its reply and compose boxes, have caused many people to complain about the lack of easy access to features that were once just a few clicks away.

Gmail has also been involved in some controversies regarding the privacy of its users, and it’s currently making headlines over its habit of reading the content of emails in order to provide more accurately targeted advertising. This has caused quite an outrage considering users of third party services who send messages to their contacts on Gmail are also allegedly involved in the scans. Google said in a court filing that Gmail users should have no “reasonable expectation” that their data is private. However, some media commentators have said that considering the amount of information Google is collecting today, it could not possibly store personal data for more than a few years.