The Oreo marketing team is forever working industriously to create a hype for their black and white cookies. Social media is their chosen vehicle for these efforts. The techniques deployed by the Oreo social media marketing team whilst highly innovative and effective, are not in of themselves difficult to replicate. Due to these efforts the brand has an exceptionally strong social media presence. Oreo’s Facebook following alone boasts over 32 million likes.

The brand has embarked on a number of highly successful Oreo social media based advertising campaigns. These outings include, Oreo’s tweet during the Super Bowl, the cookies 100 day “Daily Twist” campaign, the YouTube based series of “Cookies vs Cream” videos and the impromptu Twitter banter exchanges with major rival Kit Kat. The success of each of these social media campaigns and actions, clearly demonstrate Oreo’s social media mastery. 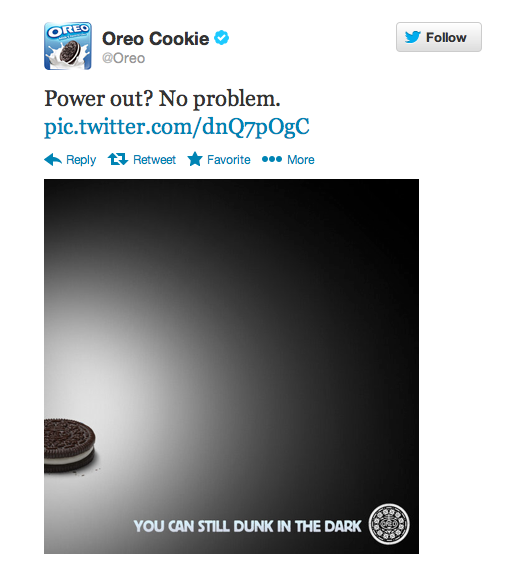 When the lighting failed at the New Orleans Superdome, mid-way through the Super Bowl, much of Northern America descended into confusion and chaos. During the 34 minute blackout football players paced the sidelines and many television viewers sought alternative sources of entertainment to help the time pass. Oreo however, formulated a master plan. During the game, Oreo’s team of social media marketing executives were watching the match from their social media bunker. In a matter of five minutes the team had composed, created, approved and tweeted a relevant ad related to the blackout. The ad showed a single Oreo cookie against a black background, the caption read “You can still dunk in the dark.”

The genius of the Oreo social media ad was quickly recognised throughout the social media platform, receiving over 16,000 retweets. The advert was celebrated widely in the media. The Wall Street Journal and The Washington Post, among others, wrote articles dedicated to the advert.

Each day during the period between, June 25th and October 2nd 2012, the cookie manufacturer posted a humorous yet relevant Oreo design of the events of each specific day. June 25th saw a Gay Pride dedicated cookie with strips of rainbow filling. Whilst the Mars Rover landing, which occurred on the 5th of August, was celebrated with half a cookie with red cream which had tyre tracks running across it. The campaign was primarily launched through the brand’s Facebook page, it aimed to achieve an interaction increase of 110% which Oreo claimed they achieved. In addition, during the campaign the Oreo Facebook page gained over 5 million new likes.

The Oreo social media “Cookies vs Cream” video campaign was sheer brilliance. The videos, which were displayed through the brands YouTube channel, displayed a number of extravagant machines which were designed to remove the cream from the cookies. The first video, which demonstrated a separator designed by the physicist David Neeval, received over four million views in just four weeks. The video is marked as private but can be viewed by some by clicking here. The series featured a further three videos, together they have received over five million views and a number of positive comments.

The humorous tweet based banter between the competing companies began when Mancunian Laura Ellen expressed her love of chocolate via tweet. The tweet read: “Can tell I like chocolate a bit too much when I’m following @KitKat and @Oreo hahahahahah.” Two days later KitKat responded challenging Oreo to a game of tic tac toe. This was a clever move by KitKat as it enabled the two companies to use their product as their icon.

KitKat’s tweet based challenge read as follows, “The fight for @Lauren_Ellenxx’s affections is on. @oreo your move #haveabreak http://twitpic.com/cb1g84.” However Oreo, seeing the potential repercussions for the loser politely declined the challenge, utilising typical Oreo social media wit. Camp Oreo’s response read, “Sorry, @kitkat we couldn’t resist … #GiveOreoABreak”. The tweet was accompanied by an image showing The KitKat tic tac toe move as half eaten.