Recent reports have established that Twitter is expected to be valued at up to $15 billion. The social media platform made the announcement that it had applied for IPO confidentiality public on September 12th 2013. True to form, Twitter made this announcement via a tweet. The tweet, which was launched from the platforms official handle, read as follows: “We’ve confidentially submitted an S-1 to the SEC for a planned IPO. This tweet does not constitute an offer of any securities for sale.” The decision was made confidentially, which means that the platform did not provide the public with a projected timeline.

Typically, an S-1 is submitted publicly, after which government regulators provide feedback, again publicly. However under the recently imposed new law, the JOBs Act, Twitter was required to submit a draft of its S-1 proposal in private. This is because the company has an annual revenue which is under $1billion. The SEC began providing Twitter with confidential advice as early as August according to a range of sources. Twitter is not considering any other avenue than an IPO. However the platform is taking full advantage of the privacy clause in order to attempt to avoid the level of excitement and hype which resulted in the Facebook IPO debacle.

Many may be familiar with Twitter. However for those who are not, Twitter is a social media platform which offers its users a micro-blogging service. The platform enables users to send and receive “tweets”. A tweet is a text-based message, limited to a total of 140 characters. Users who are registered with the site are able to send and receive tweets. However their unregistered equivalents are only able to read them. The concept of Twitter was created in March of 2006 by Jack Dorsey and the platform went live in the July of the same year. 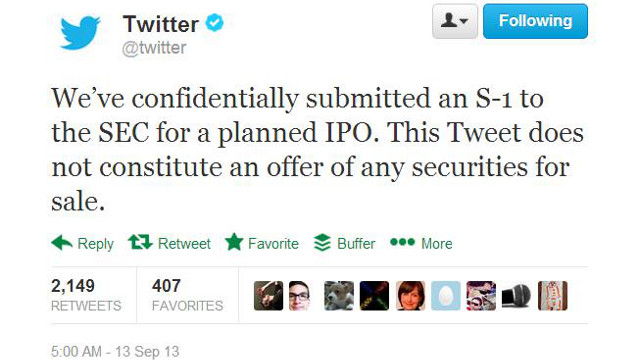 The Twitter IPO filing was confirmed ready as early as September the 30th 2013. According to several sources including the Quartz magazine, the company had intentions to make this public in the opening week of October 2013. The ultimate goal of the Twitter IPO filing is to enable the company to begin trading, many believe on the New York Stock Exchange as opposed to NASDAQ, before the American public holiday of Thanksgiving.

Quartz magazine reported that Twitter’s IPO could potentially be delayed by a wide variety of external factors. These factors range from changes to the prospectus to fluctuations with market conditions, and a potential shutdown of the US Government Representatives. This opinion has been based on the fact that the platform failed to respond immediately to an invitation by the magazine to comment to their report.