Blogging is on the rise as a great way of self expression, and maintaining a blog is now easier than ever with so many platforms to choose from like WordPress, Blogger, or Typepad. Tumblr stands out from the crowd by offering an easy format to share, highly customisable blogs, and a simplicity online communities often long for.

Tumblr was launched in 2007 by David Karp, who had been working on the platform after becoming fascinated with the concept of the tumblelog. The tumblelog is a blog made out of short posts with the ability to host multimedia content such as gifs, embedded video, or chat logs. This is an attractive perspective for anyone who wishes to keep a varied and visually interesting webpage. Tumblr was initially seen as the perfect platform for artists to showcase their portfolios, although its user base has become incredibly diverse since its inception.

One of the main features that distinguish Tumblr from other blogging platforms is the reblog button, a way for users to post content published by others onto their personal blog. This created some controversy over copyright violations at the beginning, although it has become clearer that reblogging is a way of showing endorsement and appreciation rather than stealing creative content. All reblogged post show the source, and keep a track record of activity in the “notes” section.

Another feature that makes blogging easier is the Tumblr dashboard, one stream of content where all updates from the blogs a user follows appear. This makes keeping track of your favourites much easier. Users are also able to tag posts and follow certain tags they are most interested in. This has helped not only to organise content, but to bring people together and create connections based on common interests. 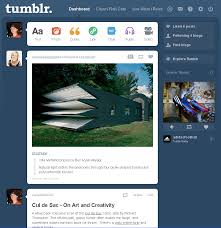 Tumblr has proven to be extremely popular. Just two weeks after its launch, there were 75,000 users on the site. By 2013, there over 100 million blogs. Tumblr is not only attractive to bloggers, but also to investors, having raised about $125 million to date. The website was backed by many big names in venture capital, such as Sequoia Capital, Union Square Ventures, or Krum Capital. The website also makes money through advertising, and it has been supporting sponsored content since 2012.

With such a great performance so far, it should not come as a surprise that big companies showed interest in the platform. Tumblr finally agreed on a deal with Yahoo! for $1.1 billion, and the news was announced in May 2013. Many users found this move a cause for concern, as they believed Yahoo! would fundamentally change the website. A petition expressing their dissatisfaction with the deal gathered over 150,000 signatures.

Regardless of what lies in store for Tumblr, it is important to acknowledge that the platform has already made a big mark on the online world. Used by numerous celebrities and big names including Barack Obama, it has all the endorsement it needs to continue shaping the future of blogging.