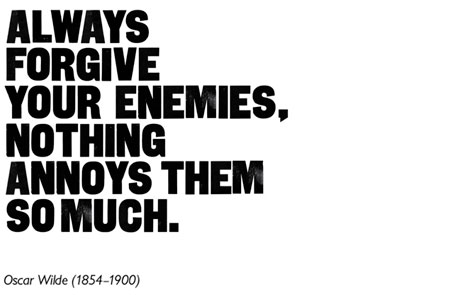 Wilde’s lasting fame can be attributed to his exceptional writing ability, mixed with his ability to use literature as a vehicle to make insights into human nature.

In the first chapter of The Picture of Dorian Gray he wrote, “An artist should create beautiful things, but should put nothing of his own life into them.” Whilst further into the novel he observed, “There is a luxury in self-reproach. When we blame ourselves we feel that no one else has a right to blame us. It is the confession, not the priest, that gives us absolution.”

Wilde also stated in The Picture of Dorian Gray that, “The aim of life is self-development. To realize one’s nature perfectly- that is what each of us is here to do.”

Oscar Fingal O’Flahertie, who was born in 1854. He remains best known and most acclaimed for his theatrical masterpiece, The Importance of Being Earnest, which opened in London in 1895. His other plays include Lady Windermere’ Fan, A Woman of No Importance and An Ideal Husband. Although he only wrote one novel, he released numerous short stories and poems, including The Happy Prince and Other Tales. Whilst in Paris, France Wilde penned Salome in 1981, the play was refused a license in England, as the English stage had placed a total prohibition on all biblical subjects at this time.

During 1882, Wilde was invited to America by Richard D’Oyly Carte, to deliver a series of lectures throughout North America. The initial tour was scheduled to last four months, however due to its extremely high levels of commercial success the tour ran for over a year. Whilst touring America Wilde received a frosty reception from the press, despite this he was well received by the local inhabitants at a number of diverse locations.

Whilst in London in 1881, Wilde was introduced to Constance Lloyd, daughter of Horace Lloyd a wealthy Queens Counsel. Wilde proposed to Lloyd in 1884 whilst she was visiting Dublin, where he was lecturing at the Gaiety Theatre. She accepted and the couple married on May 29th 1884 at the Anglican St. James Church in Paddington, London. The marriage bore two sons, Cyril who was born in 1885 and Vyvyan who was born 1886.

However, Wilde, who is widely celebrated as a gay icon, became uninterested in his wife as her second pregnancy “left him physically repelled”. During this time Wilde took a series of male lovers. In 1891 Wilde was introduced to Alfred Douglas through a mutual friend. Douglas, who was an undergraduate at Oxford at the time, was known to his friends as “Bosie” and was a handsome yet spoilt young man. A deeply intimate relationship quickly established between the two of them, to the extent that by 1893 Wilde was infatuated with Douglas.

Douglas introduced Wilde to London’s seedy underbelly of gay prostitution. Whilst here Wilde was introduced to a succession of young, working class, male prostitutes. Wilde’s rendezvous with the male prostitutes followed a similar format, Wilde would be introduced to the boy and he would then offer him gifts before dining with him privately and retiring to a hotel room. Quickly Wilde’s public and private lives became clearly divided. In a letter to Douglas as part of De Profundis he wrote, “It was like feasting with panthers; the danger was half the excitement… I did not know when they were to strike at me it was to be at another’s piping and at another’s pay.”

Wilde’s hedonism came to head when he received a calling card from the Marquis of Queensberry, who was Bosie’s father, on 18th February 1895. The card read “for Oscar Wilde posing sodomite.” Ignoring the advice of his friends Wilde launched a private prosecution against Queensberry, as the note amounted to an accusation that Wilde had committed the crime of Sodomy.

Queensberry was arrested for the charge of libel. A charge which carried a maximum sentence of two years imprisonment. Under the Libel Act of 1843 the only way in which Queensberry was able to avoid imprisonment was by providing evidence that his allegations had in fact been true. Following this, Queensberry’s lawyers hired a number of private detectives to gather evidence of Wilde’s private homosexual liaisons in order to prove the allegation.

The trials proceedings began on April 3rd 1894, in the face of the overwhelming evidence presented against him, Wilde was quoted as meekly saying “I am the prosecutor in this case.” Queensberry’s defence was led by Edward Carson QC. In his opening speech on behalf of the defence Carson revealed he had a number of male prostitutes who were willing to testify that they had had sex with Wilde. As a result of this revelation Wilde withdrew his prosecution.

The court declared that Queensberry was not guilty and that the accusation that Wilde was “posing as a sodomite” was “true in substance and in fact.” This left Wilde legally liable for the considerable expenses incurred by Queensberry during the trial, leaving him bankrupt.

Upon leaving the court a warrant for Wilde’s arrest was issued. He was charged with both sodomy and gross indecency. Wilde’s friends urged him to flee to Europe in order to avoid prosecution, however apathy prevented him from action. He weakly stated, “The train has gone. It’s too late.” Wilde was arrested and incarcerated in Holloway Prison until the court hearing.

The prosecution began on April 26th 1895, Wilde initially pleaded not guilty to the charges. Wilde answered the questions of the cross examination with his trademark wit and linguistic manipulation. At the end of the trail the jury was unable to decide on a verdict. Due to this verdict Wilde was released from Holloway prison and granted bail. Following this result Carson approached the Solicitor General for the case, Frank Lockwood QC and said, “Can we not let up on the fellow now?” To which Lockwood replied he would like to, but feared the case had become too public.

The final trial was held on May 25th 1897, Wilde was charged with gross indecency and sentenced to two years of hard labour. Wilde was released on 19th May 1897, during his imprisonment his health had deteriorated dramatically. The remaining three years of Wilde’s life were spent in exile in France, he died on 30th November 1900. Division exists among historians to the nature of his death, with causes including syphilis, meningitis and a rare ear infection.

Wilde was initially buried in the Cimetière de Bagneux, outside Paris. However his remains were moved in 1909 to the Père Lachaise Cemetery, situated within the city. The tomb can still be visited, however in 2011, the tomb was cleaned in order to remove the many lipstick marks placed by admirers over the years. The epitaph is a verse from Wilde’s, The Ballard Of Reading Goal:

“And alien tears will fill for him, pity’s long-broken urn, for his mourners will be outcast men, and outcasts always mourn.”