On 20th December 2012 Google honoured the 200th anniversary of the talented storytellers and writers the Brothers Grimm with a Brothers Grimm Google Doodle. The Grimm Brothers are amongst the best known folk story tellers, and their stories continue to be told to children to this day.

Included within their vast cannon are Cinderella, The Frog Prince, Rumpelstiltskin and Hansel and Gretel.

Google honoured the 200th anniversary of the brothers by producing an interactive Google Doodle telling one of their most famous tales, Little Red Riding Hood. 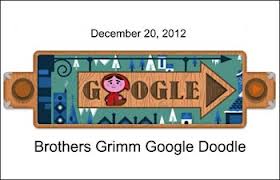 The search engine announced the Doodle via a tweet which read: “Today we celebrate Grimm’s Fairytales with an interactive story of Little Red Cap (aka Red Riding Hood).” The Brothers Grimm Google Doodle based tale began with Little Red Cap (Red Riding Hood) replacing the first O in the Google logo. Users were encouraged to follow her story via a flashing red arrow. The story was broken down into 21 slides which told the famous tale of a young girl going to help her frail grandmother. On her way to her grandmother’s house Little Red Riding Hood bumps into a devious and hungry wolf who intends to devour the red hooded heroine. However, as is common knowledge to most, the wolf’s plan is thwarted by a humble lumberjack who saves the day. The Doodle ends depicting grandma content after being rescued, knitting a purples scarf which incorporates the Google logo. To view the Brothers Grimm Google Doodle in its entirety, click here. 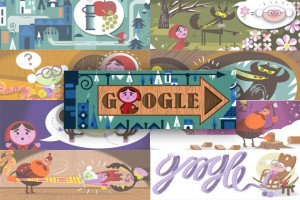 The Grimm fairy tales were created by the brothers, Jacob Ludwig Carl Grimm and Wilhelm Carl Grimm. Many of their tales have been adapted into Disney films such as Snow White and the Seven Dwarfs and Sleeping beauty. However readers of the Grimm renditions will be more than aware that the Grimm tales are far darker than their Disney counterparts. The Grimm tales are adaptations of German folklore tales. The brother’s diligently spent years collecting the stories from various sources including local storytellers, at the beginning of the 19th century. Their industrious efforts resulted in the 1812 publication of a book containing 86 German folklore tales. Another compilation of short stories followed in 1814 this time containing 84 stories. Their final publication was the two part tour de force Deutsche Sagen, which included a jaw dropping 585 German Folklore tales. The Brothers literary efforts did not go unrewarded; in 1819 they were both given honorary doctorates at Marburg University.

What is most noticeable about the creative efforts of the Grimm Brothers is the lasting impact which there work has and still has within society’s collective consciousness. A quick glance at television schedules or cinema timetables quickly reveals that the Grimm Brother’s legacy is alive and well. NBC recently launched the series Grimm, which comprised of modern adaptations of the timeless classics. ABC is also embarking on a Grimm related project, providing its own adaptations under the moniker “Once upon a Time”. Away from the screens, a recent publication: Fairy Tales from the Brothers Grimm aims to present the stories as they originally appeared.

Google has often celebrated the anniversaries of celebrated writers producing animations or interactive interfaces for the occasion. Many Users may remember the interactive “20,000 Leagues under the Sea” themed Doodle to celebrate the 183rd birthday of Joules Verne. However the impact that the Grimm tales have on many children and their childhood is priceless, providing iconic and timeless tales which match their endless imagination. Due to the strength and quality of their tales it is little wonder that 200 years later they are still widely received. We loved the Brothers Grimm Google Doodle and here’s to 200 more years!