On Thursday 21st March 2013, Twitter celebrated its seventh birthday. The site has grown massively over the last few years to become one of the most used social media platforms so we have put together our favourite seven Twitter facts alongside a little history into this micro-blogging website.

According to the platforms CEO, Dick Costello, an astronomical 500 million tweets are tweeted by users every day on the social media platform. The site now claims an active membership of 200 million users.  However this figure provided by the UK newspaper, The Independent, has been seen as conservative by many. Twopchart on the other hand estimate the platforms active membership to in fact be in the region of 500 million users.

In a recent interview the triplet co-founders of the site: Dorsey, Biz Stone and Evan Williams stated that they had no idea the website would get so big. They were it seems taken as much by surprise as we were. The company in its Birthday blog stated that it now sees the platform as a “true global town square. A public place to hear the latest news, exchange ideas and connect with people all in real time.” 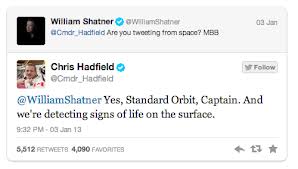 In fact on January 3rd this year the “global town square” went where no social media platform has been before. The intergalactic realm of outer space, allowing the astronaut Commander Hadfield to express himself via the platform:

William Shatner:  “@cmdr_Hadfield Are you tweeting from space?”

The greatest hashtag error in history.In her efforts to promote her new album, Susan Boyle made use of the platform. However her record label made the mistake of sending out the hashtag: #susanalbumparty. Many people misread the post and it went viral.

In second place came the provocative pop super star Lady Gaga who has a vast following of 35,261,238 users. However she was defeated outright in the popularity polls by Canadian boy superstar Justin Beiber. The hordes of his loyal and devoted fans, who label themselves as “Beliebers”, through their unprecedented levels of support gained him the top spot with a total of 36,305,545 followers.

The platform just keeps growing! A total of one million new account are reported to be created every day. Working out at a total of 11 new twitter accounts being created every minute!

After achieving Presidential victory for his second consecutive term, Barrack Obama, posted: “four more years” and included a picture of himself hugging his wife, the First Lady, Michelle Obama. Currently the tweet is the most retweeted tweet of all time, accumulating a total of 810, 000 retweets.

Beyonce’s appearance helped the Super Bowl XLVII, to become the biggest trending topic the platform has ever seen. The event witnessed a total of 24.1 million tweets, being sent on the night of 3rd February 2013.

When established in 2006 by Jack Dorsey, the site was originally called Twittr. The grass roots project has expanded phenomenally over its seven year history. Predictions for the sites ad revenue for the year 2014 are estimated at a jaw dropping $540 million.

In his recent exploration of the Marianna trench, in the Pacific Ocean, James Cameron tweeted from his submarine 35,775 feet below sea level. The tweet read as follows: “Just arrived at the ocean’s deepest point. Hitting bottom never felt so good. Can’t wait to share what I’m seeing w/you.”