Over its years of operation, Twitter has witnessed a number of famous first tweets. The Twitter VIP list includes religious leaders, musical superstars and social media platform CEOS.  The most challenging tweet of any account is perhaps the first tweet. With the first tweet brands, businesses and individuals announce their presence on the platform to the world. These simple first words can have a dramatic impact on how others interact with them from that point on. This blog post looks at the first tweets from some of the world’s most famous individuals. 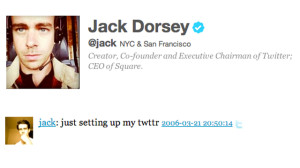 Twitter co-founder and CEO Jack Dorsey is alleged to have sent the first tweet in the history of the platform. The tweet was posted on March 21st 2006 and read as follows, “just setting up my Twttr.” To date this post has been retweeted a total of 17,769 times and been designated a favourite 15,953 times.

His Holiness The Dalai Lama

The Buddhist religious leader announced his presence on Twitter via tweet on February 22nd 2010. Surprisingly for a first tweet he did not introduce himself to his following, merely presented a link to a venue at which he would appeared the day before. The impersonal first tweet is as follows, “His Holiness the Dalai Lama in Los Angeles – 21 February 2010 http://bit.ly/cRGXyr”. 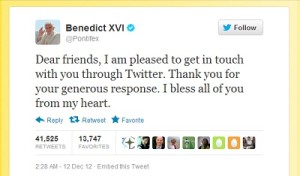 The new pope used Twitter as a platform to officially bless his following. The tweet was sent from his official handle @Pontifex, which is Latin for “greatest pontiff”.

The initial tweet was posted on December 12th 2012. It read as follows:-

“Dear friends, I am pleased to get in touch with you through Twitter. Thank you for your generous response. I bless you all from my heart.”

In a matter of hours these simple words had been retweeted a total of 41,000 times and had been made a favourite by a total of 14,000 individual accounts.

Facebook captain Mark Zuckerberg’s first tweet differs from others famous first tweets on the list as it was directed to another user’s handle. The ambiguous tweet read as follows “@ooontz I knew you’d be under ditka.” Of all the first tweets included in this list Zuckerberg’s received the lowest levels of interaction. This tweet received a mere 11 retweets and 16 favourites.

Jay Z’s wife and pop starlet was a late comer to the platform, making her first tweet on April 5th 2012. The tweet which was part of a larger internet re-launch for the star read as follows “Hey World, It’s B! I’m so excited to invite you to my new http://beyonce.com – we’ve been working hard, and it’s finally ready for you XO.” The starlets first words have been retweeted a total of 35,480 times and made favourite 15,578 times. 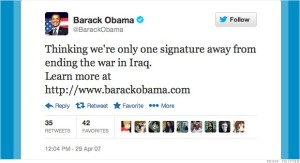 The American President used his first tweet to make users aware of the immanency of the end of the Afghanistan war. The tweet which was posted on April 20th 2007, read as follows, “Thinking we’re only one signature away from ending the war in Iraq. Learn more at http://www.barackobama.com.”

The pop superstar made her first tweet to the world on 26th March 2008. The starlets pilot tweet read as follows, “sequin catsuit thats been painted to my tired little bod, post tommy boy party, where I met the incredible dj bob sinclair “world! Hold…” Despite being grammatically poor on a number of levels the tweet received 806 retweets and 556 favourites.

The boy wonder’s first tweet received the greatest reception of all those included in this famous first tweets list. His first tweet which was posted on 11th May 2009, received a total of 112,215 retweets and 57,816 favourites. The tweet which advertised his new single read, “Check out my single “ONE TIME” on my myspace and spread the word for me. Thanks www.myspace.com/justinbieber.”