If you’ve ever been tired of accessing the same old web pages you always do and if you’ve ever felt frustrated when refreshing your Facebook page every two minutes and finding no new updates, then you could benefit from becoming acquainted with StumbleUpon.

The site is a social bookmarking discovery engine, which recommends web pages based on your stated interests and previous StumbleUpon activity. Its rating system – thumbs up if you like the site, thumbs down if it’s not your cup of tea – means the more you use StumbleUpon, the more relevant your recommendations become.

The platform aims to both show users websites they would never have found otherwise and to create a community based on interests and stumble activity. It can be accessed either via a toolbar compatible with most mainstream internet browsers as well as certain independent ones, or through mobile apps.

Founded in November 2001 by Garrett Camp, Geoff Smith, Eric Boyd and Justin LaFrance, StumbleUpon quickly attracted the attention of Silicon Valley investors. A notable influence is Brad O’Neill, who fund-raised over $1 million and assisted the company when it came to moving its headquarters to San Francisco. In 2007, StumbleUpon was bought by eBay for $75 million, but in 2009 two of its founders bought it back. Garrett Camp, Geoff Smith and a number of investors currently run the platform independently and StumbleUpon now has offices both in San Francisco and New York City. 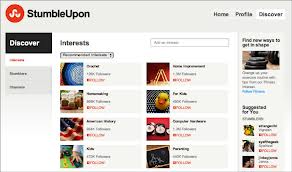 In 2011, the website removed content generated by users during years of service, including HTML blogs and photography, stating that it cannot run a successful blogging platform at the same time as operating the discovery search engine. StumbleUpon currently operates a number of specific services targeted at different user types: StumbleDNA for iOS, which provides a stream of recommendations, friends’ activities and trending topics; StumbleUpon Video, where users who don’t have a toolbar can stumble videos; Su.pr, a URL shortening tool available to registered users; and StumbleThru, which allows users to stumble entire websites, including YouTube, BBC.com, the Onion, and many others.

The history of StumbleUpon shows its user base growing year after year. In 2002 it reached its first million users, and by 2010 it could boast ten million registered users. By mid-2012, there were 25 million people with StumbleUpon accounts. With such an extensive user base, it comes as no surprise that advertising is important to StumbleUpon. As the platform’s model sends users straight to websites, there is no need for advert displays or pop-up windows. Advertised websites simply appear as sponsored content throughout the stumbling experience, and users can in turn rate the website.

However, the platform has not been untouched by the volatility of tech businesses, and the company had to let go of almost a third of its staff in 2013. The future for StumbleUpon remains a mystery, with no news of what updates to expect in the near future, if any. With commitments to reduce loading times, its ability to generate traffic and clear focus, StumbleUpon should be a name the online community won’t easily forget.