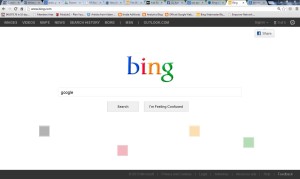 The blog continued to inform users that the search engine was performing a test, if users entered a “certain telltale query” then they would experience:

“…something a little more bland. We decided to go back to basics, to the dawn of the Internet, to reimagine Bing with more of a 1997, dial-up sensibility in mind. We may see some uptick in our numbers based on this test, but the main goal here is just to learn more about how our world would look if we hadn’t evolved.”

Bing provided no indication or hints as to what the keyword was. However when users’ entered Google, the search page changed into the Google homepage with a couple of changes. The tongue in cheek Aprils Fools’ uppercut took on the April Fools’ search engine king at their own game. The main changes in the interface, were that instead of the “I’m feeling lucky”, option users had the “I’m feeling confused” search option. Clicking the option sent users to the explanatory blog on Bing’s homepage.

There is no doubt that the prank was an assault on the bland and sparse nature of the Google homepage, masquerading as an April Fools’ Day joke; so much for the good natured wit and humor of April Fools’ Day. This joke proved to be one of the most daring and provocative internet based April Fools’ to date, and is sure to leave a sour taste in Google’s mouth.

In the second April Fools’ joke from Bing, they announced the launch of a new “SEO tag”. This came in the form of a piece of code which allows webmasters to inform Bing where to place their sites. The accompanying blog stated: “it’s time you take control of not just your SEO work, but of your rankings as well!” Examples Include:

Hidden within the humour of this ruse is a sly stab at Google. In the blog, Bing states that one of the reasons behind its new SEO policy is that they have seen: “the positive feedback generated by this desire to partner with websites, instead of keeping them in the dark about important data by blocking it or not sharing it.”

The joke may be lost on some people, but it is referring to Google’s (not provided) keyword referrals. This is the data which Google has been exclusively sharing with AdWords advertisers since 2011.

“The moon and the stars are not above us, the Earth is on the other side of our feet.” Moroccan 🇲🇦 #proverb https://t.co/OqfoniZUbp
- Saturday Aug 13 - 1:10am