In 2009, researchers discovered a new use for the Google algorithm: to determine which species are critical in order to sustain various ecosystems by using PageRank for Eco Systems. The discovery was made by a paper which was published in PLoS Computational Biology. The paper claimed that the PageRank feature used by the Google search engine could also be applied to the study of food webs. A food web is essentially an intricate network which determines what eats what in a particular ecosystem. The paper’s authors claim that the algorithm could be used to determine which extinctions would lead to the collapse of the ecosystem and PageRank for Eco Systems seems to work.

Each species exists in a complex relationship with the other species within its ecosystem. Due to this, a single extinction can result in the loss of apparently unrelated species. Currently investigating the effect that extinction of a species would have on any given ecosystem is difficult, even in the simplest of ecosystems. In even the most basic of these ecosystems, the number of combinations is said to exceed the number of atoms within the universe. Due to this, it would be impossible to try every combination. However, co-author Dr Stefano Allesina realised he could use PageRank to solve the problem. The realisation occurred when he accidentally found an applied mathematics paper describing the Google algorithm. Only minor changes were required in order to convert it to be suitable for ecology and create a similar model of PageRank for Eco Systems.

In an interview Dr Allesina described the process. “First of all we had to reverse the definition of the algorithm. In PageRank, a web page is important if important pages point to it. In our approach a species is important if it points to important species.” However the changes did not stop there. They also had to create a cyclical element. 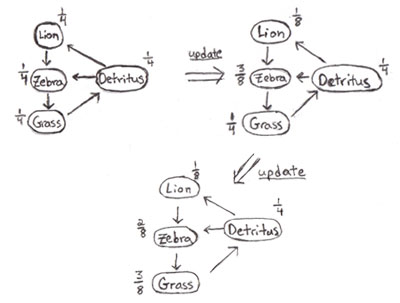 This had to be done in order to make the food web system suitable for the algorithm. This was achieved through including what became known as the “detritus pool”. Dr Allesina has explained the concept in a statement: “When an organism dies it goes into the detritus pool. In turn gets cycled back into the food web through the primary producers. These are the plants. Each species points to the detritus. The detritus points only to the plants. This makes the web circular. And therefore leads to the application of the algorithm.”

The two co-authors have tested their method. For their test they made use of published food webs. Using the algorithm, they ranked species by the damage their extinction would cause to the ecosystem. They also made use of existing algorithms. What was revealed by the comparative tests was that the PageRank algorithm was just as effective as the more complex versions in use. The work has been welcomed by the WWF-UK Director of Programmes. He said: “As the rate of species extinction increases. Conservation organisations strive to build political support for maintaining healthy and productive ecosystems. Any research that strengthens our understanding of the complex web of ecological processes that bind us all is welcome.”