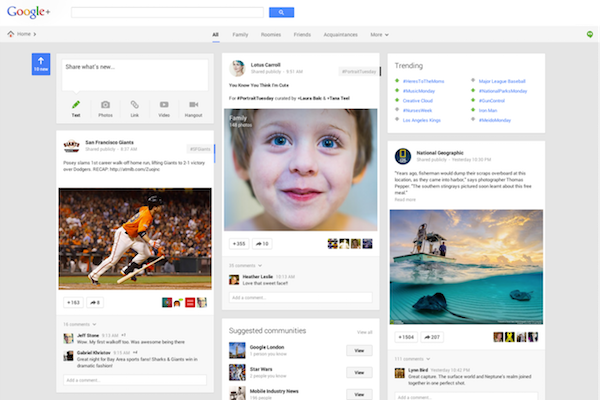 According to a recent BlogSpot blog release Google Plus is now the fastest growing social media platform in existence. With active users numbering over 500 million, and over 235 million individuals active on the platform throughout the internet. This interaction is through +1’ing applications in Google Play and across the internet, hanging out with friends and contacts in Gmail or connecting with friends via search.

Trying out the Communities feature is simple, click on the Communities icon, then either create or join an appealing community to your personal preferences. The expansive existing Communities include: Call of Duty players, Liverpool FC Fans, Star Wars, Fashion Reader, Space and The Knitting Lounge.

One of the main differences which Google Plus Community’s provide, especially to businesses, is the ability to join relevant Communities acting as your business page. This is an aspect where Google Plus is ahead of its competitors in the form of Facebook and LinkedIn. As currently neither of these sites provides the option to join groups as a business page.

In line with the Google Plus redesign which occurred in May 2013, Communities also saw a visual refresh. The redesign involved slight tweaking of the user interface of Community pages, whereby some elements where moved. The page which created the community has however gained greater prominence in the new designs interface. This change is in the form of a large card in the top right hand corner which displays the page and an option to add to Circles. However if the Community was established by an individual profile then this option is not available. The about section has been moved from underneath the categories to beneath the “Created By” card.

On the old Communities format, the moderators and members of the Community had different sections. Under the redesign, the two have been merged into one overview. Also included in the new format is a star to mark community moderators on top of their profile photo, and they always appear on the Members widget. The users which show in the widget after the alterations are now random, and change each time the page is refreshed.

Changes also occur when removing posts, previously the removed post would disappear into a message which in turn disappeared shortly after. Now a removed post remains in the same size as the post until the page is refreshed, allowing community owners and moderators an opportunity to rethink their decision and either restore or discard the post.