Frequently the Google homepage is taken over by artistic “google doodles” celebrating the anniversary or birthday of a significant event, individual or location. But who creates these doodles? Just three examples of the past doodles, a Pac-Man game, a playable Les Paul Guitar and an interactive underwater world, to celebrate the birthday of Jules Verne, demonstrate the scope of the doodles which inhabit the Google homepage for 24 hours.

The phenomenon of the doodle began back in 1998. The first doodle was a stick man drawing which replaced the “O” of the logo. It was used to show that the search engine’s founders were away on holiday. From these humble beginnings, the doodle has developed into an increasingly regular occurrence on the search engine’s homepage. To date over 1000 individual doodles have appeared on the Google homepage, as time has passed the quality of the doodles and their intricacy has increased. Doodles have been used to celebrate both the famous and the obscure, to remember key individuals and to champion social rights movements and associated issues.

Recently, a greater number of the doodles which appear are interactive and shareable through social media platforms such as Facebook or Twitter. Without the doodle celebrating what would have been the 132nd birthday of Gideon Sundback with a giant zip down the middle of the search engine’s homepage, how else would people know he was the unsung genius who invented the prosaic zip?

In the case of the London 2012 Olympics the Google doodle team provided an original sport-themed doodle for each day of the festivities. To demonstrate, on one day users were invented to practice shooting basketball hoops, whilst on another day synchronised swimming featured. Each doodle is accompanied by a series of online news articles, discussing the doodle and the person, event or object which it celebrates. Doodles provide bored office workers with cheerful variation to the routine of the office day.

If doodles are considered an art form, they are by far the most viewed art globally. However, despite the attention and sometimes excitement which doodles arouse, there is often little mention of the band of “doodlers” who create them. Members of the team can be seen, admittedly in costume, by watching the Charlie Chaplin doodle, which is available by clicking here.

Each doodle is seen by hundreds of millions of web users globally. Some of the doodles are created in a couple of hours, whilst others, such as the intricate video celebrating what would have been the 65th birthday of renowned pop star Freddie Mercury, are completed over a period of months. Every single doodle is lovingly created by a handful of “doodlers” who reside in a small office in the U.S. state of California. 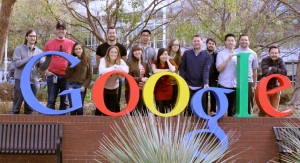 Ryan Germick is the “creative lead” of the doodle team, however he says he doesn’t think about the sheer number of web users who will view his team’s artistic outputs. “Human brains are not built to understand how hundreds of millions of people interpret something. For me it’s more about seeing if I can make my colleagues laugh, or learn a new technique. Then I’ve done my job. We just make sure we are representing art and technology in the best possible way.”

He also revealed that the doodle team do not consider themselves to be artists or designers. “We are the line between entertainment, arts, technology and graphic design. Those lines are very blurry.” He says that he and his team of doodlers aim to provide the search engine’s visitors with “the greatest amount of joy with the limited resources available”.

Previously in the history of Google doodles, Dennis Hwang was responsible for the majority of the doodles which appeared on the search engine’s homepage. However Dennis has now moved on to other things. Typically doodlers do not allow themselves to take any credit for their artistic outputs. “It’s not about us as individuals, it’s about Google as a culture,” Germick explained. 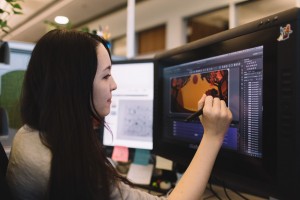 Surprisingly perhaps, the majority of doodlers work on their artistic efforts during what Google have termed their 20% principle. This is the idea that every Googler spends 20% of their paid employment on their own projects.

Initially Kris Hom, a technical engineer, worked on doodles as part of his 20% time for personal projects, however now he is a full time member of the Google doodle team. In an interview he revealed that the peak of his career to date had been when his mother shared her score on one of his playable Olympic doodle games.

With typical doodler humility, Hom stated that the doodles were merely a means to “humanise the home page.” According to Germick the doodle selection process is relatively democratic, whereby it is about creating an element of surprise as opposed to simply finding something, someone or event which is a good fit.

However, sometimes doodles are suggested by a members of the public. In addition, a number of doodle concepts are also suggested by members of foreign Google offices. The majority of doodles are created using digital drawing tools, however sometimes doodles are created using traditional drawing and painting techniques. This occurred when doodler Jennifer Hom painted a doodle celebrating what would have been the 407th birthday of Rembrandt van Rijn. To create this doodle she painted a portrait of Rembrandt in his artistic style, accompanied by the Google logo in the same style.  The doodle can still be viewed by clicking here.

Much debate has emerged as to whether doodles should be regarded as art. Deyan Sudjic, director of London’s Design Museum said, “The point about art is that it is free of function. Design – which used to be called commercial art – is tied down by a functional obligation. Andy Warhol began as an illustrator and made himself into an artist. The drawings he did as an illustrator sell for a lot, but not as much as his art does.”

On the other hand, graphic designer Si Scott, believes that design, including Google doodles, is the new modern art. However it is important to remember the underlying corporate function that doodles perform for Google. Namely they enable Google to play with their corporate image and present a playful company to the world. As long as Google retain their search engine hegemony it is highly likely that these doodles, whether viewed as design, art or subliminal branding, will continue to be a daily part of many people’s internet experience.