Over the years Google has astounded us with the dedication it has given to producing fresh and original Google Doodles. Every now and again, they will out do themselves, providing us with intricate and artistic interactive Google Doodles. But where did it all begin and why? 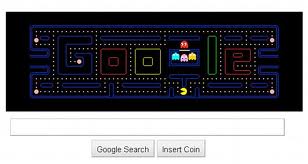 The first interactive Google Doodle was launched on 21st March 2010. The Doodle marked the 30th anniversary of the game Pacman and was produced in conjunction with Namco. Visitors to the search engines home page were able to play Pacman in the Google logo. The logo was indented into a rectangular maze. The fully interactive logo mimicked the sounds which the original game made. The sites “I’m feeling lucky” button was replaced for an “Insert Coin” button. By pressing the button once visitors were able to play Pacman on the site, using the directional arrows. Clicking the button a second time enabled a second player to play as “Mrs Pacman” using the W,A,S,D buttons to control their character. Clicking the button a third time utilised the “I’m feeling lucky” function. On the 23rd of March the design was removed. However due to the phenomenal levels of popularity for the design, the search engine released on the same day a permanent site for Google Pacman.

Later that year on the 4th September, the search engine launched a fully interactive logo to celebrate the 25th year of the discovery of Buckminsterfullerene or “Buckyball”. On the 6th of September the team launched an interactive Doodle featuring a collection of coloured balls which swarmed around the cursor. 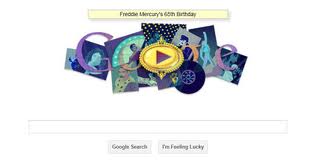 The 8th of October saw Google’s first animated Doodle outing. The site launched an animated music video of “Imagine”, to celebrate the 70th birthday of the deceased John Lennon. Other dead celebrities to receive the animated commemoration include Freddy Mercury. The site celebrated his 65th Birthday on 5th September 2011 with a fully animated video of the song “Don’t stop me now”. The Doodle team launched another animated outing in the same year. This time is was to celebrate the 122nd birthday of actor Charlie Chaplin. The doodle, which was the sites first video Doodle, featured a black and white YouTube video. When clicked on the video started playing before directing users to the usual Google search page providing information on the special event.

February 8th 2011, saw one of Google’s most interactive Google Doodles. In celebration of the 183rd birthday of the Science Fiction writer Jules Verne, author or 20, 000 leagues Under the Sea. By “Pulling the Lever” on the search page, users gained an underwater view, including sights varying from divers to a coral formation of the sites logo. 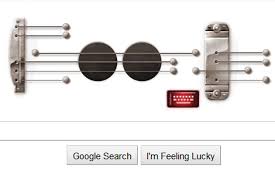 In one of the teams most ambitious outings, the celebration of Les Pauls 96th Birthday, on June 9th 2011, featured a fully interactive eclectic guitar Doodle. The Doodle allowed users to play strings of the guitar by hovering the cursor over the strings on the Doodle. Users were also able to interact with the Doodle through their keyboard. U.S. users of the site were able to record a 30 second video clip of their “jams” on the site. These videos had a unique URL and were able to be sent to friends. Similar to the Pacman Doodle, due to the vast amount of popularity, the Doodle has its own page which is available via the Google archive page. Other musical themed interactive Google Doodles include the playable synthesiser incorporated into the Doodle to celebrate Robert Moogs 60th birthday on May 23rd 2012.

June 15th 2011, saw the site play host to an almost real time display of a lunar eclipse happening at the time. Pictures were sourced from countries where the eclipse was visible: South Africa, Dubai and the Canary Islands. A scroll bar featured was incorporated allowing visitors to view the entirety of the eclipse. 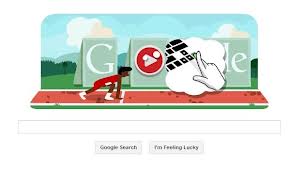 Last summer, to celebrate the London Olympics, the site launched a Doodle which converted the Google logo into a fully playable set of hurdles. Other playable Interactive Google Doodles launched during the Olympics include the sports: Canoeing, Football (or Soccer) and Basketball.

One of our favourite interactive Google Doodles here at SEO Web Marketing was the playable Star Trek animation in celebration of 46th anniversary of the original series of the science fiction classic. 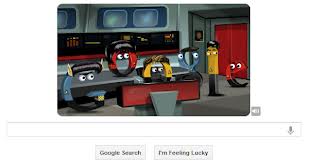