Google Books allows users to access books from some of the most comprehensive university libraries in the world from the comfort of their own homes. It came to life in 2004 as Google Print, and aimed to digitise approximately 15 million books in its first decade.

As the years passed, Google’s list of partners for the project grew and the digital archive became more international with support from institutions such as Complutense University of Madrid, Spain, and the Municipal Library in Lyon, France. Google scanned 20 million books by 2012, delivering on its initial promise but scans seemed to have slowed down recently and their goal to scan all known books by the end of the current decade may prove to be out of reach. At last count, Google’s digital library showcased around 30 million volumes. 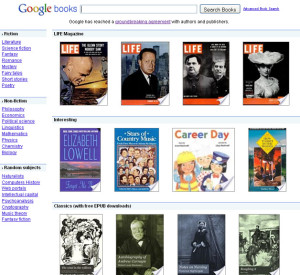 It hasn’t all been plain sailing for the internet giant in its quest to create this database. In fact, Google Books struggled with a great deal of legal issues and bumped against copyright laws numerous times. The scanned books are made available for free if out of copyright, or based on a system of snippets and preview pages for books that are still in print where the author has given permission. However, due to the international aspect of the internet and local legislative differences, a book’s copyright status can be hard to determine. Due to the speed at which books are scanned, some errors in tagging and page order also occur occasionally, and Google Books implemented an error reporting system for users to help identify mistakes.

Throughout the history of Google Books, the project hasn’t been a stranger to lawsuits. Two lawsuits were filed against Google in 2005, one by the Authors Guild and one by the Association of American Publishers and five publishing companies, all accusing Google of not respecting copyright laws and not properly compensating authors for the digitisation of the books. Another lawsuit was filed by visual artists in April 2010, although it is not a dispute focused solely on Google Books, but on an alleged wider culture of infringement of visual artists’ rights at Google.

A settlement was eventually reached with Authors Guild, and it proved to be controversial, heavily criticised by the media and finally rejected by a judge. The settlement saw Google agreeing to pay back $125 million to rights-holders, cover their legal fees, and create a new platform where they could advertise and sell their books. Authors of books that were out of print but still under copyright could submit compensation claims if their books were featured on the site.

However, this settlement triggered a number of complaints from European figures, some American organisations, and was rejected in 2011. Part of the reasoning for the rejection was the unreasonable expectation that rights-holders would have to claim their rights after their works had been reproduced without prior permission. After the rejection, Google continued to use its database, although the project is no longer the idealistic digital library it once claimed to be.