GPS has become a permanent fixture in modern society, people use it to chart their position and to measure the distance and time of runs and bicycle rides. It is also used by individuals to check in to locations ranging from airports and train stations to restaurants and shops, displaying their activity freely to the world at large.

Despite the scope provided by GPS, there is one aspect in which this feature has not been widely used. This is to provide person-to-person tracking. Bizarrely, perhaps, people are extremely happy to make the world aware of their attendance at a restaurant, but are unwilling to make use of a feature, such as Google Latitude, which shares their exact position, at all times around a geographic location. This habit means that people currently lose one of the best potential assets provided by GPS, spontaneity.

The CEO and co-founder of the new iPhone and Android App “Circle”, Evan Reas, said in an interview with Co.Design, “It could be magical to know who is around us, whether that is knowing that your friend you haven’t seen in six weeks is in a café next door, or that the woman sitting next to you on the plane is from your tiny hometown in Wisconsin.” What is perhaps most interesting about Circle is that it does not offer anything fundamentally different from the existing tracking products currently on the market. The app scans your Facebook account to find any registered users, it then shares your coordinates with them, whilst at the same time, scanning theirs. 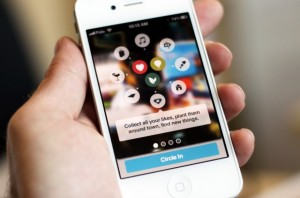 Where Circle differs from existing products is purely presentational. The majority of existing GPS based apps on the market are currently offering a full screen display of Google Maps with a list of friends collected at the top. However the user interface provided by Circle takes the emphasis away from the map. On Circle the map comprises a small section of the app’s home screen, the eyes of most users simply move past it in favour of the more important features Circle offers. These features include, what friends are in your area and what network acquaintances are in the locality, whether it be fellow classmates from your university course or teammates from your Sunday football team.

“We wanted to be the app that will quickly and simply give you the answer to ‘Who’s around me right now that I care about?’ anytime, anywhere,” Reas states. This philosophy of “who is” opposed to “where is”, can clearly be viewed at the core of the app, especially on the home screen. Rather than watching a number of blips move around a map, users are observing their friends. The immediate introduction the app provides for users is incredibly human, it is a form of face to face introduction. The app also provides the possibility of friends being able to track down each other, a messaging section is provided so people do not have to force themselves on others.

Despite all this, Circle faces a hard and prolonged journey to success. At this stage it is too early to tell whether the app’s person friendly interface is sufficient to persuade people to surrender their exact global longitude and latitude. More imminently however Circle has to persuade large numbers of people to download their app and register, so your friends can sign up for the service. Without a sufficient membership it will be impossible to gauge whether users will actually enjoy the app and find it beneficial.

Currently however, the app looks set to provide a solution to a previously unsolvable problem. If users wish face to face interactions to make a comeback against the unrelenting wave of social media, then Circle looks to be one of the best options currently on offer.