How Creative Industries Can Maximise Their Audience sing Social Media

Socrates was not a fan of the written word but look at what books have offered the world. Could you ever imagine a world without Shakespeare, Edgar Allen Poe, Robert Frost’s “Stopping by Woods on a Snowy Evening”? Or perhaps your favourite novels, comic books, magazines or newspapers? Dante Alighieri would have had a difficult time sharing his Divine Comedy; Inferno, Purgatorio, and Paradiso. Humanity has been able to record history and share that information on a magnitude that Socrates could have never fathomed.

Now is a new age in history. The transition from written word to the documentation of history, data, and life stories are shared through technological platforms. If Socrates were alive today, he might consider the internet blasphemy but again, it is another way to store information from around the world, only this time that information is available at the touch of a button.

If you wanted to learn about famous artists in the Balkans, Russia, East, or elsewhere around the globe, now is an age where you do not have to stop at the local library and scroll down their gigantic filing system of information. On top of time and overall convenience, when looking up topics and data, we are receiving information and up-to-date data on our favourite artists and creatives instantly.

Artists are coming out of the wood work receiving a larger audience than ever before. Crunching some numbers on active monthly users per social media platform:

And surprisingly this is not the whole list. While the endless platforms could go on, just with this pool alone, think of the reach artists, musicians, writers and other creatives could have.

Regardless of overlap in platforms, that brings the total user accounts from those six social media platforms to a whopping 2.39 billion. Whether you are a famous pop star or a hobbit of an individual with big dreams, ready to branch out into the new world, there are the platforms that can level the marketing playing field. It’s no longer David, the lone creative, verses Goliath, the big business.

With the right tools and knowledge to back you up, there is the capability to get your name out there and be on your way to global recognition.

There are several artists who, without social media, may never have been recognised to the magnitude they are at today.

Salivate Fidai, a Russian artist, describes himself as an experimental artist. Had there not been the technological advances to share his work, he could be just another local artist drawing pictures on matchboxes and carving sculptures on pencils. 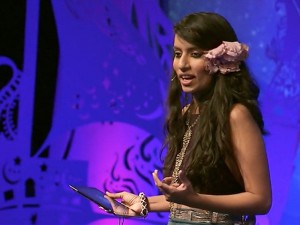 Shilo Shiv Suleman is a contemporary Indian Artist. Her TED Talk on “Using Tech to Enable Dreaming” opened people’s eyes, not only to the possibilities that technology has to offer the world but also, to this amazing artist’s unique visual displays and vision.

She used her TED Talk to answer the question “has our technology, our cellphones, iPods and cameras, stopped us from dreaming?”. Shilo believes not that instead technology should be used in collaboration to connect people and art across the world. She demonstrates “Khoya”, her storybook for the iPad, which floats the visitor through a magical world in seven minutes of pure creativity.

During the protests following the Gang Rape in Delhi, Suleman was there at India Gate. The stories of these gang rapes made people more afraid. This was a time of much fear for women, not only in India, but elsewhere in the world. 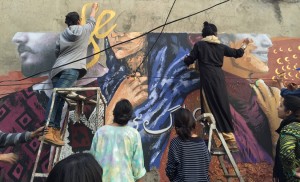 Those following the event were over inundated with articles of the events. Shilo Shiv Suleman developed the Fearless Collective using social media to rally artists, filmmakers, street artists, photographers and activist to act. The response had a monumental reaction. The stories and personal messages were positive and empowering. Fearless was a movement which gave power back many living in fear.

Think of this scenario — one artist rallying several to act, utilising technology and specifically social media to make it happen — spread a message.

Actors from the Philippines, a producer from Mill Valley, CA and a Filipino American writer with a dream, and director (TBD) — Cebu. As a novel, Cebu won an American Book Award and recently was a finalist at the Beverly Hills Film Festival. In the story the protagonist, Ben, is a Filipino American priest who takes his mother’s body home to Cebu for burial. This is the storyline for the soon-to-be movie. The book Cebu was originally written in 1991. Peter Bacho, a former attorney, journalist, as well as professor at Evergreen State College Tacoma Campus, has finally broke into the film industry. 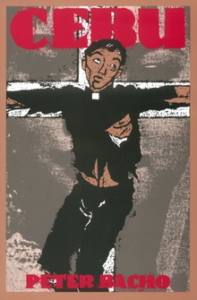 Bacho always saw Cebu as a feature film. Even though Cebu was a finalist at the Beverly Hills Film Festival last year, the trailer had no traction and was going nowhere. In November of 2015, Bacho posted the trailer on Facebook, along with the writer’s interview with The International Examiner. The professor’s post had 4000 views in a week and 9000 views since its original Facebook debut. With the traction given, Cebu, will hopefully be a great breakout film, crossing over between the United States and the Philippines. Behold, the power of grassroots, online promotion.

The last highlight is an amazing story of a son’s love for his father. Henry Köhler lost his father, Carl, in 2006. He wanted to have an exhibition to honour him, along with his work. Carl Köhler was a Swedish artist. Since there was a lack of interest in Sweden surrounding Carl’s work while he lived, Henry made it his mission to start the project to honour his father’s memory in 2007 — spreading the word about who Carl was and what his art is.

Henry Köhler wanted his father and his work to be recognised and acknowledged in Sweden. His father was a visual artist working within the Neo-modernistic style. He attended Swedish Royal Academy of Art, also studying in Paris and Oslo. 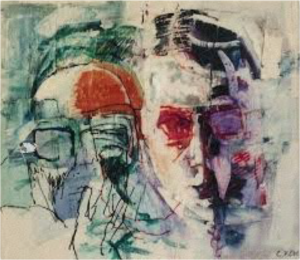 Carl Köhler’s work was highlighted in exhibitions and articles in America and Canada. Even Random House Publishing shared his author portraits on social media. The exposure from the Canadian and American articles and exhibitions led to 30,000 likes and 7,000 shares in about a week on social media. Just think of how impactful online communications can be. To learn more about Henry’s mission check out his Voices of the World interview and his article on Huffington Post Art & Culture.

Plato, though an apt pupil of Socrates, believed in the power of recording conversations. This process was a way for him to share history in the making. As you can see, social media is a tool to redefine art, to create a movement empowering others, to build cross-continental relationships, gain interest in new works, and renew the vigor of old works that deserve to shine. It does not matter if you are famous or just exploring the life of a creative, social media has the power to build virtual bridges, share your dreams, and have the opportunity for those dreams to be recognised.