Apple has enjoyed great success with its Ipad series. The unstoppable series has even been able to access the classroom market for school children. This seems paradoxical as the Ipad does not include a keyboard as a standard feature. However the statistics speak for themselves, Apple recently stated that it had sold more than 8 million Ipads to various educational centres and schools worldwide. Despite this level of success, there is a company that argues that Ipad and similar tablets are unsuited for the classroom. This company is Amplify. It is the department of education for the Newscorp group.

Amplify focuses on creating digital products to be used in classrooms. The company has recently shed light on its latest project in the form of an Android powered ten inch tablet. Differing from other Androids this model is aimed specifically at teachers and their students. It aims to help increase efficiency and productivity. 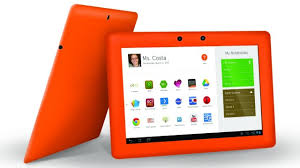 Joe Klein, former chancellor for the New York City Department of Education and CEO of Amplify. He commented on the tablet at a press release earlier this week. “While there are other tablets currently on the market, the majority of these are, however, consumer goods which have been recycled for an education market.” Before stating how Amplify’s new product differs. “This is a new tablet based learning platform, which has been specifically designed for use in a classroom setting. With the ease of the tablet’s use during the school day placed at the forefront of design.”

Amplify have outsourced much of the technical construction of the platform to other hardware producers. The company has also made use of the Android processing and operating system. However what the company has done is to design its own user interface. The company claims that the interface has been specifically designed for use in a classroom setting. The proof of this will be in the proverbial pudding. The homescreen layout consists of several “notebooks”. Each of the notebooks is a separate subject or course which the student is undertaking. Or is a separate class of children which the teacher is taking. Enabling efficient and easy organisation of the student’s class work and also preventing them from losing books and worksheets. However the real genius of the brain child lays in the ability the tablet provides for teachers to interact and monitor students directly through their tablet.

To demonstrate, when a child opens their notebook in a teacher’s class, the teacher instantly sees the child’s name appear of the register as present. From this point the teacher is able to utilise an array of tools through the tablet. The teacher is able to monitor which apps a child is using during the class. They can also close any apps which are deemed to be distracting or inappropriate to the lesson. They can share learning information and materials directly, and conduct quick quizzes on the students. The pad even comes equipped with an “eyes on the teacher” feature. The feature temporarily shuts down the tablet, allowing the student to pay full attention to the teacher.

The basic package of the tablet comes equipped with pre-installed software. Such as the Encyclopaedia Britannia, literacy tools from EveryFi, access to Google Apps for education and Khan Academy tutorial videos. Amplify has also announced that it is talks with publishers, in order to provide a library of textbooks and learning materials for students using the tablet. The tablet will be sold in two formats, one with wifi and the other equipped with 4G. The tablets are currently being tested in American school districts this year. However there is a silence relating to the tablets UK launch.