On August 12th 2010 the Google homepage was taken over by a doodle celebrating the 71st Anniversary of The Wizard of Oz. The doodle, which was created by doodler Mike Dutton, appeared throughout the majority of the world. The style used to create the doodle was a traditional painted portrait. In the doodle the heroes of the story, the Tin Woodman, the Cowardly Lion, Scarecrow, Wendy and her loyal canine companion, Toto, are depicted in the foreground.  The background of the doodle is comprised of an “Oz” landscape in which the “Yellow Brick Road”, leads from the heroes to the Emerald City, which comprises the “L” of the Google logo and appears in the top right corner of the Doodle.

The Google logo appears blended into the doodle’s background. To demonstrate, the first “Goo” section of the logo is blended into the background’s red fields. The second “G” of the search engine’s logo is incorporated into the yellow brick road. The doodle can still be viewed by clicking here. 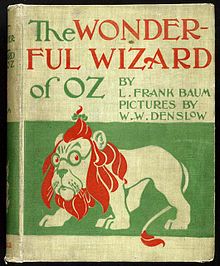 The Wizard of Oz began life as the children’s novel “The Wonderful Wizard of Oz” which was written by L. Frank Baum and illustrated by W. W. Denslow. The novel was first published on the 17th of May 1990, by the George M. Hill Company of Chicago. Baum was born on the 16th of May 1856 in New York, he was the seventh child to his parents, Cynthia Stanton and Benjamin Ward Baum. He spent much of his early life on the family’s country property, Rose Lawn, which was situated on the outskirts of Syracuse. As a result, Baum had a sheltered upbringing, as a child he was diagnosed with a deficient heart. During his childhood Baum spent much of his time playing with imaginary friends and reading books.

At the age of fifteen, Baum and one of his younger brothers Harry produced “The Rose Lawn home Journal”. As a result of spending much time in and around theatres Baum decided at the age of eighteen that he intended to pursue a career in acting. Initially his father, who was a wealthy oil baron, opposed Baum’s intention of becoming an actor, however later he gave in and supported him. As a result of attempting to become an actor, Baum travelled through a number of America’s states and worked a wide number of jobs in order to support himself.

The tale of The Wizard of Oz, features the female heroine and protagonist Dorothy, who is a young orphaned girl raised by her Aunt Em and Uncle Henry, on the barren landscape of a Kansas farm. Dorothy is accompanied by her pet dog, Toto, who is her only fiend and source of happiness on the farm. In the tale a cyclone strikes the farm with both Dorothy and Toto inside and as a result the duo is transported to a field in Munchkin County, a region in the eastern area of Oz. When the farm falls from the sky it lands on the evil overlord of the Munchkins, the Wicked Witch of the West and kills her. 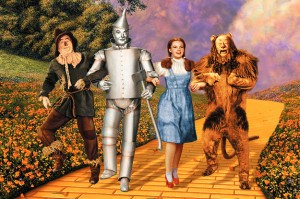 In order to reach the Emerald City Dorothy sets off along the Yellow Brick Road, or the road of yellow bricks. Whilst travelling down the road Dorothy meets a number of companions who join her on her journey. The first of these is the Scarecrow, who she frees from the pole upon which he is hung. The second companion she meets is the rusted Tin Woodman, to whom she restores movement, using an oil can. Next she meets the Cowardly Lion who she encourages to join her. Each of her three new companions is travelling to the Wizard in hope of gaining something they lack. The Cowardly Lion wants courage, The Tin Woodman wants a heart and the Scarecrow wants a brain. The group have to overcome numerous perils on the road to the Emerald City, including Deadly Poppies.

When the group arrives at the Emerald City and explain their situation to the Wizard, he agrees to help them on one condition, that they kill the Wicked Witch of the West. As the group travels to kill the Witch she tries on numerous times to stop them. These attempts include sending a swarm of black bees to sting them to death and sending her Winkie soldiers to kill them.

Dorothy and the group are captured as part of the Witches’ final attempt to defeat them. In this attempt she summons the Winged Monkeys using the power of the Golden Cap. The Monkeys carry the group to the Witch. Upon arrival at the Witches castle Dorothy is forced to do housework, until she is angered by the Witch and throws a bucket of water over her. To Dorothy’s surprise this causes the Witch to melt.

The group then use the Flying Monkeys in order to travel back to the Emerald City, upon arrival they soon learn that the Wizard is an ordinary man and does not possess any magical ability. A guard at the Emerald City suggests the group seek the help of Glinda, the Good Witch of the North. Glinda informs Dorothy that she had the ability to return home all the time, all she had to do was to click her heels together three times. After saying her farewells, Dorothy does this and arrives back home in Kansas for a happy family reunion.

Due to the popularity of the story, it has been adopted into other media forms on a number of occasions. These include a number of film outings such as the 1939 film, which stared Judy Garland as Dorothy. Initially Baum wrote the story as a standalone novel. However following the success of the book and numerous letters from children, he wrote a number of other novels. These include “The Marvellous Land of Oz”, written in 1904, the final Oz book was written in 1911, “The Emerald City of Oz”.

The Google doodle team often create dedicated doodles for children’s characters. These include a dedicated doodle for the creator of the “Mr Men” series, Roger Hargreaves, whose 76th birthday was celebrated with a Mr Men themed doodle on 9th May 2011.