On April 14th 2005 the Google logo on the search engine’s homepage was replaced by a doodle celebrating what would have been the 553rd birthday of inventor, artists and scientist Leonardo da Vinci. In the doodle, the letters of the Google logo were depicted in the style of da Vinci’s journals. The colour red was used and the letters had the effect of being drawn by hand, the background was comprised of light red which had the effect of being painted using watercolour paint.

The doodle, which can still be viewed by clicking here, appeared on the search engine’s homepage globally. Personalisation for da Vinci was achieved through the inclusion of some of his most famous works, most notably the Mono Lisa which formed the second “O” of the logo. Another of his famous works, The Vitruvian Man, comprised the first “O” of the logo, whilst the second “G” of the logo had a pair of wings attached, a reference to da Vinci’s efforts to invent a flying machine. 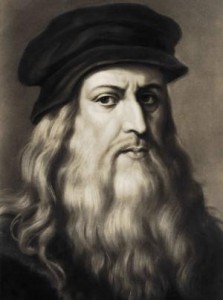 Leonardo entered the world on April 15th 1452, he was born in the hill town of Vinci, in Tuscany. He was born out of wedlock, the son of a Florentine legal notary, Messer Piero Frusino di Antonio da Vinci and a peasant girl named Caterina. Leonardo had no surname in the modern sense, da Vinci literally translates as “of Vinci”, a reference to his birthplace.

Not much is known about da Vinci’s early life, however he received an informal education in Latin, geometry and mathematics. In 1466, aged fourteen, da Vinci was apprenticed by the artist Andrea de Cione, widely known as Verrocchio, who had one of the finest workshops in Florence. Here the young da Vinci was introduced to a range of technical skills and theoretical training, including chemistry, metallurgy, mechanics and carpentry.

Whilst at the workshop, Leonardo collaborated with Verrocchio on “The Baptism of Christ”, in which he painted the young angel holding Jesus’ robe. Da Vinci’s efforts were so superior to his masters that Verrocchio put down his brush, never to paint again. By the age of twenty da Vinci had qualified as a master of the Guild of St Luke, which was the guild for doctors of medicine and artists. However da Vinci remained close to Verrocchio, to the extent that even after his father had set up his own workshop, Leonardo continued to collaborate with him.

The earliest known work produced by da Vinci is an ink and pen drawing of the Arno valley, which was completed on August 5th 1473. A court record from 1476 shows that Leonardo, along with three other men were charged with sodomy, but were later acquitted. Following the court record there is no record of da Vinci’s life until 1478. In this year he received his first independent commission, to paint an altarpiece for the Chapel of St. Bernard in the Palazzo Vecchio. He received a second commission, during March of 1481, “The Adoration of the Magi” from the monks of San Donato a Scopeto. However neither of these commissions were ever completed. 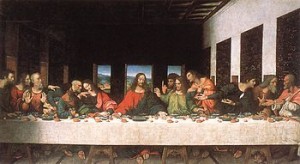 From 1482 to 1499 da Vinci lived and worked in Milan. Whilst here he was commissioned to paint the “Virgin of the Rocks” and “The Last Supper”. When Ludovico Sforza was overthrown during the Second Italian War in 1499, Leonardo and his friend Luco Pacioli, fled Milan and found shelter in Venice. Whilst in Venice, da Vinci was employed as an engineer and military architect. He was charged with devising means to defend the city from naval based attacks.

The following year he returned to Florence, where he created the cartoon of “The Virgin and Child with St. Anne and St. John the Baptist.” The work won such adoration that flocks of men, women and children clamoured to see the completed work.

1502 found da Vinci in Cesena, where he entered the service of Casare Borgia, the son of Pope Alexander IV, who put him to work as a military architect and engineer. In order to gain this patronage Leonardo had completed a map of Borgia’s stronghold, at this time maps were extremely rare.

Upon returning to Florence in 1503, da Vinci re-joined the Guild of St Luke and spent the next two years producing “The Battle of Anghiari”. Da Vinci is known to have lived in the Belvedere in the Vatican, Rome from September 1513 until 1516. Whilst here Leonardo was commissioned, by Francis the then king of France, to produce a mechanical lion which could walk forward, before revealing a cluster of lilies from its chest.

Leonardo da Vinci is well known for his journals and notes, which contain his studies in both science and engineering. In many ways the journals are as impressive as his paintings. In total, the journals amount to 13,000 pages of drawings and notes. The journals were made on a daily basis throughout Leonardo’s life and contain continual observations of the world in which he lived. The journals cover a huge scope of topics ranging from designs for human wings and shoes to walk on water to a study of the foetus in the womb.

Da Vinci was also greatly acclaimed for his approach to science, an observational one, he aimed to understand a particular process or phenomenon by both depicting and describing it. However due to his informal education in Latin and lack of any scientific education, many of Leonardo’s scientific observations were ignored by professional scholars during his lifetime.

Leonardo da Vinci died on May 2nd 1519. During his time serving under Francis I, the two had become close friends. As a result da Vinci is alleged to have died in the arms of the king, however this account may be legend as opposed to fact. Leonardo’s impression on Francis was such that 20 years later the French king is said to have said, “There had never been another man born in the world who knew as much as Leonardo, not so much about painting sculpture and architecture, as that he was a very great philosopher.”

Google have celebrated the birthdays of a number of history’s greatest painters, this includes the 407th birthday of Rembrandt van Rijn and the 152nd birthday of Dutch painter Vincent Van Gogh.