January 20th 2011 saw the Google homepage taken over by a doodle celebrating the 50th anniversary of the inauguration of President John F. Kennedy. The doodle was created by doodler Mike Dutton. Surprisingly, perhaps, due to the popularity of Kennedy and the impact he had on the globe, his doodle only appeared on the search engines homepage in the USA.

The doodle and associated blog can still be viewed by clicking here. In the doodle the search engine’s logo was represented in its trademark colours of blue, red, yellow and green. However in the doodle each letter was comprised of words from his famous inaugural speech, including the famous “ask what you can do for your country.” A depiction of Kennedy formed the second “G” of the logo. 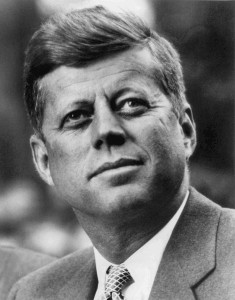 John F. Kennedy, the 35th president of the United States of America, was the second youngest man to assume the role, to Teddy Roosevelt. He was also the only Roman Catholic to gain the presidency. Kennedy was an equally gifted and charismatic man who in his short presidential term of just three years, provided the world with an inspiring vision of freedom and peace.

Kennedy was born the son of Joe Kennedy, who forged a career for himself as a ruthless and self-made business tycoon. Early in his career Joe made a fortune selling whiskey during the American prohibition period, with the end of prohibition he turned his attention to movies and real estate. Joe Kennedy went on to become Roosevelt’s ambassador to London, where he fell from grace due to his shameless support of appeasement for Hitler’s Nazi Germany. However his children were able to outgrow this shadow and become perhaps the closest thing America has ever had to royalty.

John Kennedy joined the US Navy during September 1941, just before America joined the Second World War, serving in the Pacific Theatre. Whilst here he gained recognition due to his actions, which saved the crew of his patrol torpedo boat after it had been rammed by a Japanese destroyer in the proximity of the Solomon Islands. This action earned John the Navy and Marine Corps Medal. Shortly after leaving the navy Kennedy pursued a career in politics, serving as a congressman for the Democratic Party in the years between 1946 and 1952, following which he was elected to the Senate.

1960 saw Kennedy defeat Senator Lyndon B. Johnson, becoming the Democratic candidate for the presidency. Johnson served as Kennedy’s vice-presidential candidate, Kennedy was inaugurated as president in 1961, defeating the Republican Richard Nixon. Kennedy’s victory can be attributed to a mixture of his superior public oratory skills and his ability to look good on television. Kennedy’s inauguration was accompanied by his inspiration speech, in which he told his fellow Americans “ask not what your country can do for you, ask what you can do for your country.”

Kennedy helmed a glamorous presidency and the White House played host to a number of artists and cultural figures. Throughout his presidency Kennedy engaged in a number of affairs with women ranging from Marilyn Monroe to society women. He is reputed to have informed the then British Prime Minister Harold Macmillan, that if he did not have a woman every day he would suffer from headaches. However none of this was made public knowledge at the time. 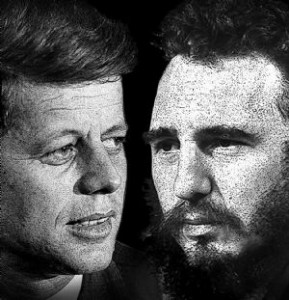 From a political point of view, Kennedy’s presidency was dominated by the spectre of the Cold War. Which was the global struggle for dominancy, battled out by the democratic free world, led by America, against the communist dictatorships of the U.S.S.R. and its allies. In the first year of his residency Kennedy authorised the ill-fated CIA led invasion of Cuba, at the Bay of Pigs. The event was an absolute failure as Cuban exiles were overwhelmingly defeated in their attempt to overthrow Fidel Castro.

Cuba at this time was an ally to the Soviet Union, the then Soviet leader Nikita Khrushchev decided to place nuclear warheads on the island. This action raised tensions between the two superpowers. October 14th 1962 witnessed an American U-2 spy plane fly over the island, taking a number of aerial photographs. This action in conjunction with the courage of the American spy, Colonel Oleg Penkovsky, led to the Americans discovering medium-range ballistic missiles on the island, just 90 miles away from the coast of Florida.

Kennedy ordered for American military units to begin moving southeast. At the same time a second U-2 mission to the island revealed further construction sites and the presence of between sixteen and thirty two nuclear warheads on the island. Kennedy did not reveal his knowledge to the Soviet Union, he did however warn the Soviet foreign minister, Andrei Gromyko, that the “gravest of consequences” would follow if the Soviet Union introduced significant offensive weapons to the island.

Kennedy ruled out an air strike on the sites, four days later he appeared on national television and revealed the discovery of missiles on Cuba, he also announced a naval blockade of the island. The blockade was only to be lifted when the missiles were removed from the island. Following the announcement, on the 24th of October U.S. ships moved into position. Khrushchev announced the blockade was illegal, however he ordered Soviet freighters moving to Cuba to stop.

That evening a number of telegraphs were exchanged between the leaders of the two countries. However neither side gave any ground, American military defences were moved, for the only time in history, to DEFCON 2. The following day, the U.N. called for a period of cooling-off between the two nations. However Kennedy flatly refused, the following day Khrushchev offered to remove the missiles contingent on an American assurance not to invade Cuba. 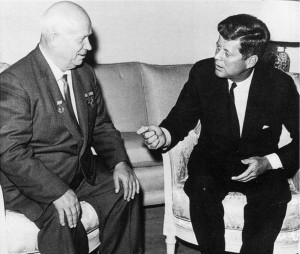 Khrushchev later changed his offer to the removal of Soviet missiles from Cuba in exchange for the removal of American missiles from Turkey, which shared borders with the Soviet Union. The same day an American U-2 plane was shot down over Cuba and the pilot killed. In a following meeting with his military advisers Kennedy agreed to offer terms in accordance with Khrushchev’s initial proposal, as opposed to immediate military action. He then warned America’s NATO allies to expect war the following day. The dawn of the following day saw Khrushchev agree to remove Soviet missiles from Cuba, Kennedy also arranged for American Missiles to be removed from Turkey in secret.

It was not only in the military sphere that the Soviet Union and the USA competed with each other during Kennedy’s presidency. They also competed in the space race. In 1961 Kennedy persuaded congress to vote in favour of granting $22 billion for the purpose of putting an American on the moon before the close of the 1960’s. This goal was achieved in 1969 when Neil Armstrong and Buzz Aldrin landed on the moon. However Kennedy was not alive to witness it.

Kennedy also made massive changes on the home front. Although initially slow he began to give his complete backing to the civil rights movement. In 1962 he sent 3000 troops to the University of Mississippi, in order to allow the black student, James Meredith, to enrol for examinations. By 1963, Kennedy had given his complete support for the movement, giving a stirring speech on national television. Similar to the space race, Kennedy was not alive to see his dream become reality, as the Civil Rights Act of 1964 which he proposed was made law after his death.

November 22nd 1963 marked the end of Kennedy’s life. He was assassinated whilst driving his open topped car. His death is accompanied by a wealth of conspiracy theories ranging from the plausible to the obscure.

Kennedy is not the only world-changing reformer to receive a dedicated Google doodle. Mahatma Gandhi also received a dedicated Doodle celebrating what would have been his 140th birthday on October 2nd 2009.