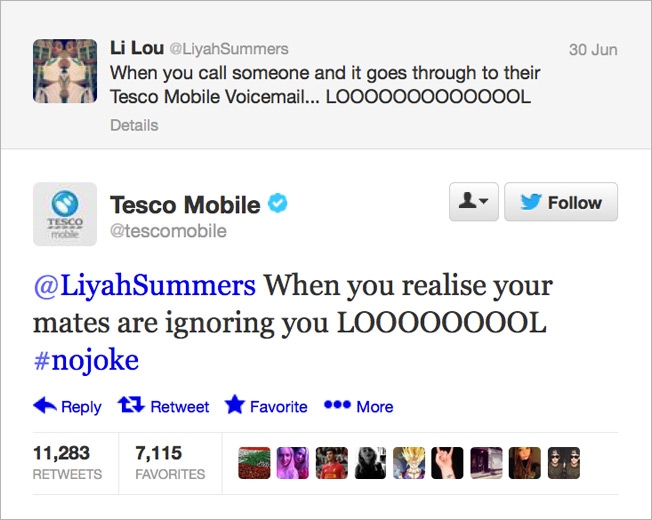 Up until 2009 Twitter was a relatively little known social media platform, its novel concept of fast paced interactions, which were limited to just 140 characters and placing hashtags in front of words, quickly gained the platform popularity. From its humble beginnings, it was hard to imagine that just a few years later it would enjoy the prestige of being one of the most popular social media platforms for both individuals and businesses globally.

Part of Twitter’s popularity can be attributed to the hashtag format. The reason why hashtags are so effective and so popular is that they enable users of the platform to quickly take part in trending conversations or topics and are also able set up their own hashtags. Time and time again, the hashtag has proved itself to be an exceptional tool for businesses launching a Twitter based campaign.

Tesco Mobile has joined the seemingly endless list of businesses to make use of a hashtag based Twitter campaign. The mobile service provider teamed up with the social media marketing agency Jam to launch their Tesco #nojoke Twitter campaign. The campaign was set up as “Some people still hadn’t got the message that Tesco Mobile is a serious, quality network, so I’m delighted that our new campaign tackled their misconceptions head-on. With all the latest handsets and the best customer service in the industry, there really is nothing funny about Tesco Mobile,” said Simon Groves, Tesco Mobile Chief Marketing Officer.

A number of the platform’s users found this out the hard way when they publically mocked Tesco Mobile from their Twitter handles. @LiyahSummers was one of these users, she tweeted, “When you call someone and it goes through to their Tesco Mobile Voicemail…LOOOOOOOOOL”. Liyah and much of the Twitter community were shocked when the Tesco Mobile team not only replied to the tweet but twisted Liyah’s comment to make it a joke at her expense. The Tesco #nojoke team reply read as follows, “When you realise your mates are ignoring you LOOOOOOOOOL #nojoke.”

Tesco Mobile’s cheeky tweet based retort gained much attention on the platform and received over 10,000 retweets from Twitter users. In order to avoid a negative backlash as a result of their comment, the Tesco Mobile team offered Liyah a peace offering. The offering included a free Samsung smartphone and £40 of credit. Following this Liyah has since changed her Twitter name to Tesco Girl.

Another similar example occurred when Twitter user @JayFeliipe decided to tweet “Immediate turn off if a girl’s mobile network is tesco mobile”. The Tesco #nojoke Mobile team replied to the grammatically incorrect tweet with their now trademark wit, tweeting “@JayFeliipe Are you really in a position to be turning girls away?” Whilst @JayFeliipe’s initial tweet gained over five hundred retweets and one hundred favourites, the Tesco Mobile textual backhand gained over six thousand retweets and four thousand favourites.

The Tesco #nojoke Mobile campaign is poignant as it serves as an excellent lesson in how brands can handle negative criticism, whilst also providing tweets which the public enjoy and more importantly, interact with. This campaign further proves that the marketing power provided by Twitter is undeniable and that increasingly the platform provides no limits to the conversation it can facilitate.

Whilst the Tesco Mobile #nojoke campaign may have raised a few eyebrows and been a little bit too tongue in cheek for some of Twitter’s users, it successfully demonstrates the level of fun that brands can generate with their campaigns whilst also marketing their products, brand or services and more importantly getting the platform’s users talking about the campaign, further deepening its effectiveness.