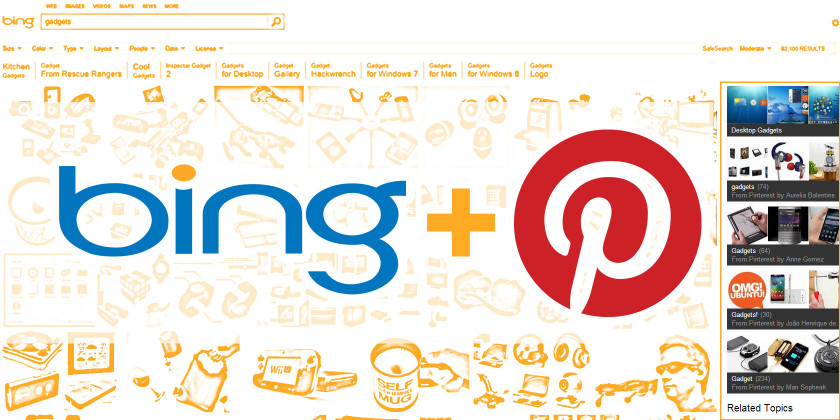 Bing integrates the Pinterest sharing option into its image search

Users of Bing are now able to share any images they find through the search engine easily with their friends on the social media platform, Pinterest. Pinterest is a social media platform which was launched in 2009, where users create pinboards with links and pictures and follow other user’s pinboards.  The Bing and Pinterest changes were launched on Friday 12th April 2013, when the Pinterest “Pinit” option was incorporated into the Bing image search feature. The “Pinit” button is incorporated into the bottom right hand corner of all images included in the image search feature of Bing. Although some sceptics claim that the Bing and Pinterest integration is not that deep, Microsoft claim that it will help frequent users of the social media platform save: “some of the hassles they face” when they are searching to “hunt down original high-resolution images.”

An excellent feature of the new “pin to Pinterest” is that credit for the image is given to the original source as opposed to Bing. This is done automatically and a link is incorporated taking users who click it back to the original high resolution image. Due to the advanced search options which enable Bing users to perform specific searches based on key criteria, Microsoft claims this will make it much easier for regular Pinterest users to find and select images by: size, resolution, colour, layout, etc. As far as online integration goes this is a relatively basic integration, and provides nothing new in terms of search engines granting users the ability to interact with the content via social media. As a search engine Bing places a strong emphasis on the importance of social media, and has already integrated with several other social media platforms, including: Facebook, Twitter, and Google+ among others.

It will be interesting to observe over the subsequent weeks and months whether the Bing team decide to take the Bing and Pinterest integration further. It would be extremely beneficial to both the search engine and users of Pinterest if the option for users to search their pinboards on Bing was made available. Equally there is the possibility to highlight your friends pinboards when a search is entered which is similar or related to a specific board. This further integration would not be too different to some of the current features on the search engine. Bing already displays Facebook photos in the social sidebar on the search engine, next to these a display of Pinterest user boards would not look out of place.