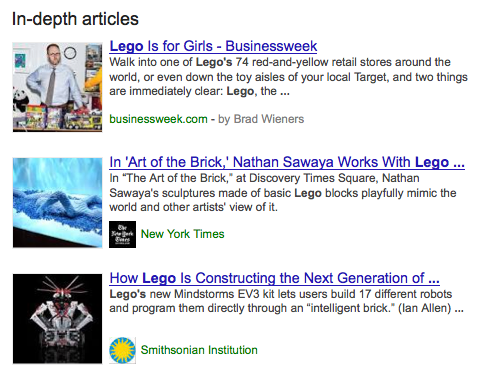 During August 2013 Google released a new feature in the form of Google In Depth Stories. This feature aims to make it easier for the search engine user’s to find articles which are relevant whilst also providing depth on a range of broad topics. The product manager, Jake Hubert revealed to the internet based news site Poynter that ten per cent of all the sites searches were about what they termed broad topics. These topics include happiness, depression, love and stem cell research.

Hubert explained to Poynter, We’re trying to find the best in-depth content. A lot of it will be from well-known publications. However in some cases the best answer is from someone’s blog or a local paper.”

But how does the Google In Depth Stories feature work? When a user searches for what is considered a broad subject, then towards the bottom of the page an “in-depth articles” header will greet them. Under this header users will find links to articles which provide extensive and authoritative information about the particular broad subject.

In the Poynter interview Hubert stated that Google was going to be “experimenting with a number of different ranking algorithm”. But for the meantime the search engine was intending to place in-depth stories “on the lower part of the page”.

The new Google In Depth Stories feature is aimed at users of Google who aren’t simply looking for news stories. In Hubert’s words the feature aims to supply searchers who are looking for something which they can “kick back and read on a Saturday afternoon and spend 15 or 20 minutes on.”

Hubert explained that the change has occurred as the search engine found that users were struggling to find informative content about specific topics. However he also alluded that the problem was not simply finding this information but also articulating a search in way that delivered the required results. He explained, “These are really hard searches to type on Google today. If you want to read a bunch of thoughtful articles about population growth, how would you type that into the search box? We know our users are interested in this content, and we see them trying to find it in our research, so we wanted to make it easier.”

What Actually Appears Within The Google In Depth Stories?

Whilst the project is still in its infancy it is clear that Google In Depth Stories has a preference towards “big brands”. Included within these big brands well known publishers are currently most favoured. However Google has promised “you’ll also find some great articles from lesser-known publications and blogs.” Currently Google’s primary way of measuring quality is through reputation, explaining the preference to big brands.

What Does The Google In Depth Stories Feature Mean For Your Company?

Increasingly Google is placing much greater preference on good quality and detailed content which is well researched. The aim is to make content non-commercial, i.e. not focused on selling either your product, services or brand. In order for your content to appear in the Google In Depth Stories section experts have revealed that at least 10% of your content should be between 2000 and 2500 words in length. Additionally, you should aim to write content which is of good quality whilst also remaining relevant or months and potentially years to come.