When Google publically unveiled its plans for Google Glass, the technological world was instantly split into two camps. One camp was for the new technology, citing the technology as a step towards a sci-fi future. The other camp was adamantly opposed to the revelation, fearing that Google would merely use the new activity for endless brand marketing. However the validity of either camps argument is currently unknown, below is a lowdown on the new Google Glass. 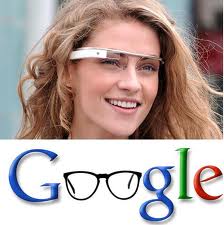 What is Google Glass?

Google Glass is an attempt by Google to release a wearable portable computer mainstream. Essentially it is a pair of glasses with an inbuilt integrated display system, powered by a battery which is hidden within the frame of the glasses. Despite the controversy surrounding the announcement of the new technology, this is not the first attempt to create wearable computers. What is new is the combination of Google’s vast reserves of banked finances twinned with their enthusiastic attitude towards getting their projects done. These two assets mean it is likely that Google Glass or Google glasses will be the first wearable computing system to appear to the public in large numbers.

When is the release date?

Initially developers estimated the release date for public consumption to be in 2014 at the earliest. However recent reports have announced that the release date has been moved forward and it is likely that Google Glass will be released by the end of 2013. The reason for the date being brought forward so drastically is that observations of people wearing Google Glass have become a common occurrence in the San Francisco area. Google also made the announcement that the winners of a “competition” would win the privilege to pay $1500 to own a prototype model, prior to Google Glass release to the public. 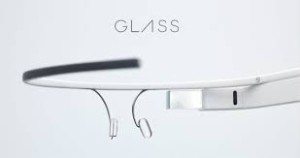 What do they do?

The principle function of the Glass is provided by a microscopic prism display. The display sits slightly above the eye line of the user; allowing users to easily see the display by looking up. Other technological features included within the Glass model are: a camera, microphone, GPS, with early reports stating that the Glass makes use of bone induction in order to provide the user with sound.

The glass is controlled through voice control. For instance, the user says “ok glass” which opens a whole variety of options to the user. These features include taking pictures or videos, sending messages the Glass converts speech into text for this function. All of these features are accessed through vocalising the name of the feature you wish to use.

Most of the functions provided are already available on mobile phones. However the Glass does provide the new hang out option. This option allows users to hold video conferences with other glass users and also with people using web cams. The feature also allows users to stream to their audience what they are currently seeing. The feature also includes directions, which provide a visual map with inbuilt GPS to enable users to get to destinations without getting lost.

All search results and features are displayed on the prism. This is in essence exactly the same as a head up display or HUD which are already in use in the military. The potential for the Glass is unlimited. Rumours state that Google is looking to equip the Glass with voice and speech recognition. The project has been given a tremendous edge in achieving this, as Google has been headhunting DNN research specialities for the project. Apps are already being developed for the Glass, confirmed concepts include, an application that allows users to recognise friends in a crowd. 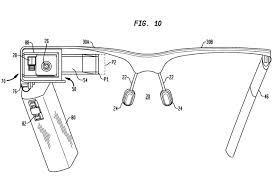 The specification of Google Glass:

A recent FCC filing conducted against the company in the United States has concluded it is likely that the Glass will make use of Bluetooth and WiFi in order to stream information and pictures to the prism or screen. In order to provide sound, it is likely that bone indication will be used. This technology uses vibrations along the skull which are sent to the inner ear and are translated into sound. This is not a new technology, critics and sceptics claim that the technology is less efficient than traditional headphones in achieving sound quality.

As with most of Google’s upcoming products, a lot of the specification details are tightly guarded secrets. Currently it is suspected that Glass will run on a modified version of the existing Android system. The camera and microphone systems are likely to be of the highest quality; however Google is yet to confirm the specifications of either. Included within the Glass model will be an imbedded GPS chip. The Glass will be available in a variety of five different colours: Shale, Sky, Charcoal, Cotton and Tangerine. In ordinary terms this will be grey, blue, black, white and orange.

Will the Glass be available for wearers of traditional Glasses?

The answer to this is a most definite yes. The press release picture Google has recently launched includes pictures of people wearing traditional glasses with a Glass modification attached. Google has confirmed that it is currently developing designs which will allow the Glass to clip onto traditional glasses. In a recent interview a spokesperson for Google recently confirmed that Google was working in conjunction with Webby Parker, the well known glasses frame designer.

How much will I expect to pay?

In a recent article the New York Times quoted an interview with an unnamed member of the Google team. The member of the team confirmed that “the Glass will cost around the same price as you would expect to pay for a Smartphone.” That places the approximate price in the region of £300-£600. The price seems to be low in retrospect, however it is likely that Google will subsidise the price in order to gain an edge in what is set to become a competitive industry. Here is how we at SEO Web Marketing envisage the impact Google Glass will have on some people……. 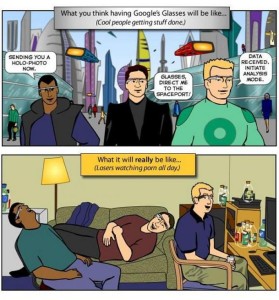