Over the years of Google’s activity April Fools’ Day has become an international holiday for the search engine. Google’s employees deliver year upon year, more and more extensive and elaborate pranks to the entertainment and bewilderment of the general public. Google April Fools Day 2013 was no exception and they once again exceeded itself delivering their moist extravagant display of April foolery to date.

Google has built a reputation for taking jokes and pranks extremely seriously, outdoing all competitors in the lengths it goes to each year in order to produce fresh jokes and pranks in celebration of April 1st. True to form the Google April Fools Day 2013 tricks once again exceeded its efforts from the previous year delivering a wide range of original pranks.

A video was launched prior to April first announcing that YouTube, established in 2005, was designed to be a contest in search of the greatest video ever produced. The video based blog launched by YouTube announced that it was finally time to select a winner. Included in the video was a warning urging viewers to watch everything before the site deleted all its content.

The spokesperson for YouTube, Tom Liston, the competition director at YouTube, ominously informed viewers: “Tonight at midnight, YouTube.com will no longer be accepting entries.” He continued to explain in the video: “After eight amazing years, it is finally time to review everything that has been uploaded to our site and begin the process of selecting a winner.”

Tom informed YouTube fans and viewers to check back in with the site in 2023, when YouTube was scheduled to return online and deliver the winner of the best video ever made. The bogus video is still available for public consumption and can be viewed through the following URL: http://www.youtube.com/watch?feature=player_embedded&v=H542nLTTbu0. So many people fell for this Google April Fools Day 2013 joke, imagine how many hours were wasted!

“Smelling is believing” ran the slogan for the new Google nose feature which was unveiled as one of the Google April Fools Day 2013 jokes. The feature claimed it would allow users to find out what things smell like via a Google search; whilst also allowing users to share aromas and scents with others via Google Plus. 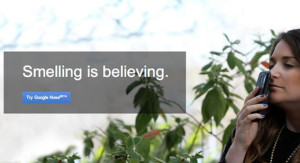 The Google April Fools Day 2013 hoax claimed to have built and “Aromabase” consisting of a jaw dropping 15 million different scents, labelled as “scentibytes”. The archive of various smells and scents had been diligently collected by Google’s “StreetSense” vehicles and Android Ambient odour detection.

The vast selection of scents and smells which users were able to search through the Aromabase included:

The introductory video for Google nose is available to view at the following URL: http://www.youtube.com/watch?v=9-P6jEMtixY&feature=player_embedded.

Another of the Google April Fools Day 2013 hoaxes unveiled the Google Treasure mode to its existing Maps feature. The treasure mode challenged users to solve a mystery centred round a famous treasure map from the infamous pirate Captain Kidd. The maps featured in this mode, allowed users to explore 2D landscapes in search for treasure chests. True to form Google warned its users: “Treasure Maps is our Beta Maps technology and has certain system requirements. Your system may not be able to display at higher resolutions than paper print. Take care when unfolding the map to avoid ripping it.” The explanatory video for the mode is available to users at the following URL: http://www.youtube.com/watch?v=_qFFHC0eIUc&feature=player_embedded.

Users of Gmail awoke on April 1st to the announcement, “celebrating its ninth birthday today, Gmail is Google blue.” Although it was untrue that Gmail was celebrating any birthday celebration, the email provider certainly did go blue. The explanatory video announcing the release of Gmail Blue is available at the following URL: http://www.youtube.com/watch?v=Zr4JwPb99qU&feature=player_embedded.

For the day users of Google Analytics found in their real time section that they had been visited by 41 active visitors from the International Space Station- control room. Users, who clicked on the “city”, then followed this by selecting the Traffic Sources or the Content options were met by a special April Fools Message. However the Google Analytics April Fools’ antics also included new Export and Send Features for the day. The bogus Google April Fools Day 2013 options which users are unlikely to take advantage of included the Export options of papyrus and sticky note, and the Send options of carrier pigeon and telegraph.

Google Nose informed users that the aroma of Dollar bills is: Cotton and linen covered in dirt, sweat and greed. However the April Fools Day 2013 pranks went even further in the name of April foolery, unveiling the Google Wallet Mobile ATM. The facility claimed to allow users to access ATM facilities from their smartphone. To access the facility Users simply entered their PIN and Google Wallet ATM allowed users to withdraw anything from $1 and $2 dollar bills through to $50 dollar bills, instantly from their smartphones. Google also informed users of the restocking procedures: “If your mobile ATM is running low on funds, a self-driving, armored, hybrid vehicle will be alerted and dispatched to your location – arriving within minutes to quickly and safely refill their ATM.” 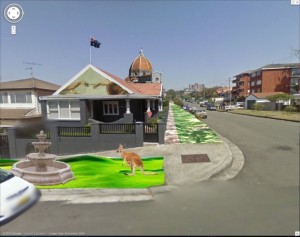 The feature invited them to transform their house on Google Maps into virtual artwork. The search engine unveiled the Google “Schmick” which was initialisation standing for: the simple complete house makeover internet conversion kit. The blog for the feature available here reads as follows: “Forgot to mow the nature strip? Deck it out with some fresh buffalo grass. Front steps falling down? Swap them out for doric columns and a pergola. Graffiti on the front fence? Cover it with so many palm trees people will think they’re on the Vegas strip.” We just love the Google April Fools Day Jokes and wonder what they will come up with on April 1st 2014!